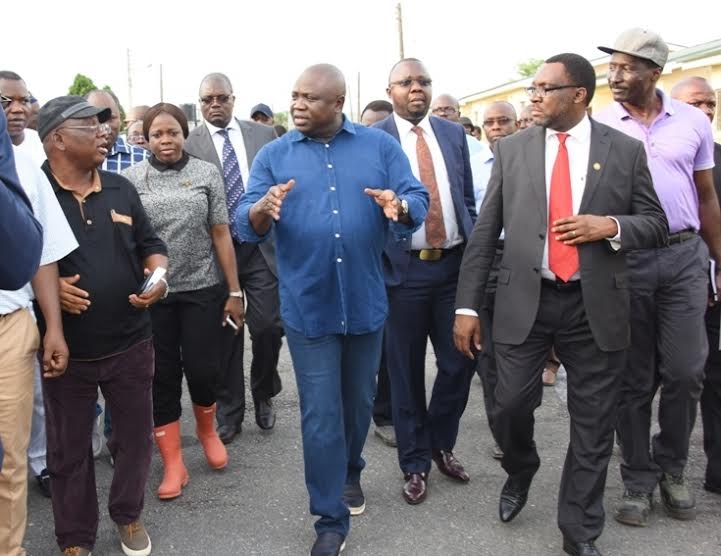 Lagos State Governor, Mr. Akinwunmi Ambode on Monday said his administration has so far injected over 1,000 additional housing units into the State and that the schemes are now ready for occupation by interested residents.

Ambode, who stated this during an extensive inspection tour of ongoing projects in the Eastern axis of the State, said the official flag off of the allocation of the housing units would commence on 9 December, 2016, while interested residents of the State needed not know anybody before applying.

At the Sir Micheal Otedeola Housing Estate in Odoragunshin, Epe, Ambode was briefed by the State’s Commissioner for Housing, Mr Gbolahan Lawal, who said the estate was part of the schemes earmarked for the rent-to-own policy of the State Government.

He said 20 percent of the entire units had equally been earmarked for rental housing, adding that the social welfarism policy of the present administration in the face of the current economic downturn necessitated the need for the rent-to-own policy.

Responding, Ambode said due to the economic recession and as a responsive government, his administration felt the great need to review the housing policies which have always existed in the State, saying that such was what brought about the new policies to make housing affordable to Lagosians.

He said: “When you consider the economic recession and then the inability of our people to actually process mortgage, we think it is time for government to be more responsive and that is why we are adjusting the mortgage scheme to rent-to-own policy.

“We think it is better that people can just come in and pay one month rent and continue to pay their rent on a monthly basis. These housing units are for the people and we want the people to have access to them.

“If Lagosians are interested in owning, they don’t need to pay any down payment of mortgage, they should just approach us and apply. They don’t need to know anybody also. It will be open to everybody. This is more about the people. As we speak now, we have over a thousand units that are going up for rentage and as we proceed, we will add additional units some in partnership with the private sector.

“We are going to have new schemes coming up in Ajegunle, Badagry, Alimosho and other areas. The whole essence is to increase the purchasing power of Lagosians.”

At the inspection of the expansion of network of roads in Epe, the State Commissioner for Works and Infrastructure, Engr Ganiyu Johnson briefed the governor on the various road projects, saying that they were aimed at developing the Eastern axis of the State.

Johnson added that the Phase two of the project started from Femi Agbalajobi to Majoda, the boundary of Lagos and Ogun State and from Oke Osho to Poka Road.

While responding, Ambode expressed satisfaction with the level of work done so far, saying there had been improvement from the last time he inspected the projects.

He said: “We decided to open up this axis of the State to complement what we are doing at the Export Free Trade Zone and also all the things that are coming up at the Ibeju Lekki axis. We believe strongly that by opening up this road to the boundary of Ogun State, we would have brought accelerated development to the Eastern axis of Lagos. We want to ensure that even as we plan to put an Airport in the East axis, it is also important that we add a road network that can complement all the efforts we are trying to put up at the Lekki Free Trade Zone.”

Besides, Ambode directed the contractor handling the projects to work 24/7 to ensure the completion of Phase one before May 2017, and ordered that the second phase of the road network to Mojada should commence in January, as well as the connecting roads between Oke Osho and Poka axis.

The governor also inspected the 20 Units Government Chalet in Epe which is currently being upgraded to 70 units with modern lawn tennis court, swimming pool, a five-aside football field, among others.