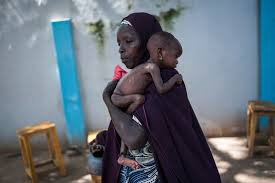 States in the North West of Nigeria are fighting to stem the scourge of malnutrition which has affected more than 1,594,462 children in the region.

The United Nation Children’s Fund (UNICEF) estimates that every single day, Nigeria loses about 2,300 under-fives and 145 women of childbearing age, making Nigeria the second largest contributor to the under-five deaths and maternal mortality rate in the world.

Also, UNICEF’s estimate showed that Nigeria has been adversely affected by Severe Acute Malnutrition (SAM) with the number of malnourished children put at 2,539,704.

A check reveals that the seven states in the zone account for more than 75 per cent of the total severe malnutrition cases recorded in Nigeria in 2016.

The governments of Kano, Kaduna, Jigawa, Kebbi, Sokoto, Katsina and Sokoto states are, however, taking measures to provide medication to affected women and children, and prevent new cases.

In Kaduna, which has an estimated 263,495 cases of acutely malnourished children aged six to 59 months in 2016, the state government and UNICEF had injected more than N824 million in 2016 to tackle the menace.

The government had also made a provision of N137 million in its 2017 budget for the procurement of therapeutic food and drugs for the management of acute malnutrition.

Jane Gwani, the Nutrition Officer in the state Ministry of Health and Human Resources said strategies adopted so far, were helping to reverse the situation.

She said that the state had collaborated with other relevant stakeholders across communities, public and private sector, Civil Society, government ministries, department and agencies to effectively contain the situation.

She disclosed that the state currently operates 17 Community Management of Acute Malnutrition (CMAM) centres – six in Zaria, six in Makarfi and one in Ikara local government areas.

“And so far, about 2, 525 malnourished children were admitted in the CMAM sites in Zaria alone, out of which 800 fully recovered, while 52 died between March and August 2016.

“This is in addition to many ongoing interventions, some of which include promotion of exclusive breast feeding and proper infant and young child feeding.

“Others include micronutrient deficiency control support and capacity building for resource mobilization to scale up nutrition, Gwani added.

Dr Florence Oni, UNICEF’s Nutrition Specialist in the state, however, said there was need to do more, given the number of children suffering from malnutrition in the state.

She noted that current high cost of food items was hampering ongoing fight against malnutrition in the country.

The chairman, who attributed the increasing rate of malnutrition in the northern part the country to ignorance, called for massive awareness campaign on good nutrition practice in the region.

In Kebbi, the government says it is working with UNICEF to provide nutrition support to the 216,795 estimated to be acutely malnourished in 2016.

NAN reports that the figure did not include the over 500, 000 children that are stunted in the state.

NAN learnt that the government had spent N100 million in 2016 on the matter, and according to UNICEF’s Chief Nutritionist in the state, Mr Arjan Dewatt the collaboration would reduce maternal and child death.

He said the joint effort was also aimed at improving the nutritional status of pregnant women and children under five years in the state.

“At least 90,500 children aged six to 59 months are severely malnourished and are nine times likely to die, and without treatment, an estimated 17,400 of these are likely to die this year,”he said.

He said 77,000 children aged between zero to six months did not get exclusive breastfeeding, which is the most cost effective intervention to prevent malnutrition and save lives.

“The records indicated that 174,000 of the 200,000 pregnant women in the state do not take iron supplements to prevent anaemia and stillbirth,”he added.

Dewatt said the the partnership with the state had, however, helped to counsel 88,000 women on breastfeeding and family best practice.

Mrs Beatrice Kwere, the state Nutrition Officer, said the ministry of health had organised sensitization and mobilization workshops for community and religious leaders on the importance of nutrition to mothers and children.

“We held child and maternal week to give care to newborn and women free of charge in three health facilities in every ward of the state.

”We want husbands to allow their wives to come and even come along with children as their health status will be checked at our various facilities in the state,”she said.

According to her, there has been steady rise in attendance of women to rural health facilities unlike before which was poor.

“Now there is steady improvement in women patronising hospitals and other health facilities even in rural areas.

“As at last August, our data shows that about 60% of pregnant women accessed health facilities across the state.”

Reports from Kano State indicates that no fewer than 55, 000 children were treated for acute malnutrition in 2016.

Dr Ayodeji Osunkentan, a Consultant Nutritionist with UNICEF, however, told NAN that the level of malnutrition in the state was being controlled with support from the Children’s Investment Fund Foundation through CMAM.

He said that with more commitment and proactiveness of the government, the issue of malnutrition would be eliminated completely.

“With more commitment from the state government in terms of counter funding and provision of facilities such as water, toilets, drugs and other technical support, there could be more motivation for more support from donor agencies.”

Also commenting, a nutritionist with the state ministry of health, Malam Murtala Ibrahim, stressed the need for the government to focus more on bringing the problem under control.

He said that 54 per cent of child death in the state was due to malnutrition, and stressed that government must employ the services of experts to address the situation.

“The government can only make proper intervention by employing qualified Nutritionists who can provide intensive awareness campaign on how to tackle the problem.”

The Nutritionist explained that the government had started making efforts by introducing courses on nutrition in its tertiary institutions.

He commended UNICEF for its intervention in the treatment of acute malnutrition in the state, disclosing that 50 intervention centres were established in six local government areas of the state through CMAM.

NAN reports that Kano state has a total of 44 local governments.

In Katsina State, the government said it had treated no fewer than 245,789 malnourished children between 2010 and 2016.

Records from UNICEF indicates that the state has an estimated acute malnutrition cases of up to 278,079 in 2016 alone.

Hajiya Rabi Ya Muhammad, the state Nutrition Officer, said that a total of 318, 689 children were admitted for malnutrition ailment in the last six years.

According to her, 80,000 children are currently receiving treatment at the various Community Management of Acute Malnutrition centers in 15 local governments of the state.

She explained that the state has 105 CMAM centers in the 15 out of the 34 local government areas in the state.

The nutritionist said the support of development partners had helped to reduce the high rate of malnutrition in the state.

Muhammad revealed that the state government had released N200 million in November 2016 for nutrition programmes.

She said that part of the money was used in conducting Maternal and Newborn Child Week, where pregnant and nursing mothers received vitamin A supplement, immunizations and other drugs for themselves and their children.

The officer attributed the high rate of malnutrition cases to poverty and ignorance on the part of mothers on how to prepare nutritious diet.

Muhammad urged mothers to practice exclusive breast feeding and to take carbohydrates, vitamins, protein and minerals at all times.

Katsina state is the second state in the Northwest with highest number of malnourished children.

Reports from Zamfara indicated that the level of government intervention was not encouraging in a state where an estimated 68,382 children and mothers have acute malnutrition in 2016.

Alhaji Isa Maru, the state Communication Officer of Save the Children, however, said the government has agreed to provide additional funding in its 2017 budget for nutrition programmes..

Maru said that the organization had mobilised the 14 local government chairmen in the state to support efforts at tackling acute malnutrition and save the lives of children.

“We pleaded for government support to enable us achieve our plan towards eradicating malnutrition in the state.

“We plan to have 30 women in different communities in the state, to train them on infant young child feeding practice, so that they will return to their various communities and also train other women and mothers,’’ he said.

Maru disclosed that the state government had in September 2016 released N5 million to address malnutrition issues, and the programme was carried out in some communities in Gummi and Bukuyum Local Government Areas.

“Part of the money was used to train women on infant and young child feeding and how to train other women.

“The money was also used to buy drugs for the malnourished children, who were suffering from diarrhea, kwashiorkor, and other diseases.

“In addition, all the 14 local councils have been providing N1.4 million monthly for nutrition programmes in primary and secondary schools in the state.

“We have been able to establish nutrition classes in 10 secondary schools in the state to enlighten students on the types of food that should be taken for a good diet.

“Our aim is for the children to educate their parents at home, before they grow up, so that by the time they grow up, they can help their communities by addressing the issue publicly,’’ he said.

He recalled that the Emir of Bakura and that of Shinkafi had made donations in the past to tackle acute malnutrition in their domain.

In Sokoto State, the estimated acute malnutrition cases in 2016 was put at 34,419 and the state government said it would start producing Ready to Use Therapeutic Food (RUTF), a nutrient used in treating malnutrition.

The state Commissioner for Health, Dr Balarabe Kakale, said it would be cheaper to set up a factory to produce the supplement than continue to buy it from abroad.

Kakale said: “The state government can no longer afford to continue to spend on the importation of RUTF which is produced from groundnut paste.

“In the past,`we import Ready to Use Therapeutic Food from South Africa and United States, however, we are now working to stop that, we will soon start producing it right here in Sokoto.

“RUTF is highly nutritious and is made from groundnut paste, this is the first step of boosting nutrition to have intelligent children.”

Also, the Permanent Secretary in the ministry, Alhaji Almustapha Othman, said the government had conducted a scientific research and feasibility study on the planned production of the food.

“The research was undertaken by a team of scientists and nutritionists from the ministry, Usmanu Danfodiyo University, Sokoto and other stakeholders., and the findings showed the availability of all the ingredients required for the RUTF.

” The state government will also sponsor another research team to undertake a study tour to a similar factory in Niamey, Niger Republic, to fully understudy the modus operandi of the firm, with a view to ensuring effective and successful take off of our own in Sokoto.”

The state Nutritionist, Alhaji Ali Hamza said CMAM sites had been set up in nine local government areas of the state with 46 centres distributing the RUTF.

”CMAM will also be scaled up in the remaining 14 local governments, with the support of Dangote Foundation.

” The second one is the Infant and Young Child Feeding Programme where women are being taught on breast feeding and how to produce weaning food.

”The women are also being taught lessons on maternal and neonatal child health, household practices, personal and environmental sanitation.”

Hamza further said that children were being administered with Vitamin A supplements, as well as deworming tablets, among others.

According to him, malnutrition prevalence in the state has been reduced by about 10 per cent in the state since the introduction of the two programmes.

Mr Paul Mudzongo, UNICEF Nutrition Specialist in Sokoto, called for renewed commitment by government to curb acute malnutrition through the adoption of comprehensive, multi-sectoral nutrition strategies across the northern region.

Details on the various intervention strategies adopted to tackle the issue in Jigawa were not immediately available, but the state is said to have an estimated 167,364 acute malnutrition cases in 2016.