Muslims now to go for Christian pilgrimage to Jerusalem-LASG 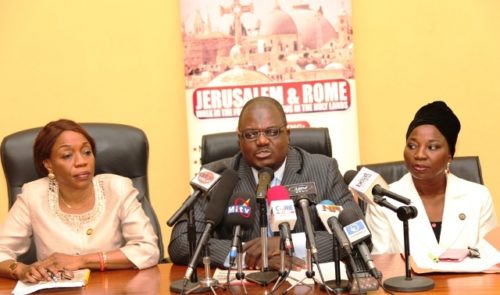 The Lagos State Government on Monday said Muslims will now be attending pilgrimage to Jerusalem meant for Christians.

The government also announced the introduction of part payment plan for residents of the State willing to embark on pilgrimage to the holy land to cushion the effect of the current economic realities in the country.

The State Government also announced the introduction of an initiative to reward religious leaders who are able to mobilize up to 50 members of their religious organization for pilgrimage with one slot each.

The State’s Commissioner for Home Affairs, Dr Abdul-Hakeem Abdul-Lateef who stated this while addressing a media briefing at the Bagauda Kaltho Press Centre in Alausa, in Ikeja, Lagos, Southwest Nigeria said the move to allow Muslims to go to pilgrimage in Jerusalem was to enable them visit the third holiest mosque in the city.

“We also urge Muslims that from this month, we will be accommodating Muslims who intend to visit Jerusalem because Jerusalem is home to the third holiest Mosque,” the Commissioner said.

He said in view of the existing harmonious relationship among the religious bodies in the State, government had also approved pilgrimage to Israel by any Muslim willing to do so.

Giving further details on the installment plan, Abdulateef said: “Today, we are commencing the sale of forms for the Christian Pilgrimage on a new note. In response to the economic recession, the State Governor, Mr Akinwunmi Ambode has approved the payment for pilgrimage to Israel, Rome and Greece on installmental basis. So, Lagosians can begin to pay for pilgrimage with any amount.

“The price for Israel is N580,000 but if anyone intends to combine Israel with Greece and Rome, the price is N720, 000. With the commencement of the ‘Pay Small Small’ we expect that Lagosians will take advantage of this opportunity to ensure that most of the things they have read in the Bible, they go to Israel and see.”

Speaking on the partnership with religious leaders on slots for mobilization of their members, Abdul-Lateef clarified that the initiative was not a negation of the No-pilgrimage Sponsorship of the State Government but a modern trend in marketing designed to reward business partners.

He added that the latest initiatives on pilgrimage to holy land were in continuation of the good governance being offered by Governor Ambode, who according to him, believes that government exists only to enhance the welfare of the people and not to endanger it.

“Governor Ambode believes that no matter how well built infrastructural facilities are, if the spiritual upliftment and the spiritual wellbeing of the functionaries of government and Lagosians generally who should take ownership of these facilities is not well enhanced, then we have not started.

“That is why there is a holistic approach to governance in Lagos State and we are blind to religion in the State. We are blind in the sense that we love ourselves, we do not discriminate on ground of religion; meritocracy is the order of the day and not nepotism and in order to ensure that we walk the talk, the Governor has strengthened the two pilgrims’ board,” Abdulateef said.

The Commissioner, however, warned that the State Government would disqualify anyone suspected to be intending to flee to other countries using the window of the pilgrimage, saying that people with such intention should dare not to pick up forms.