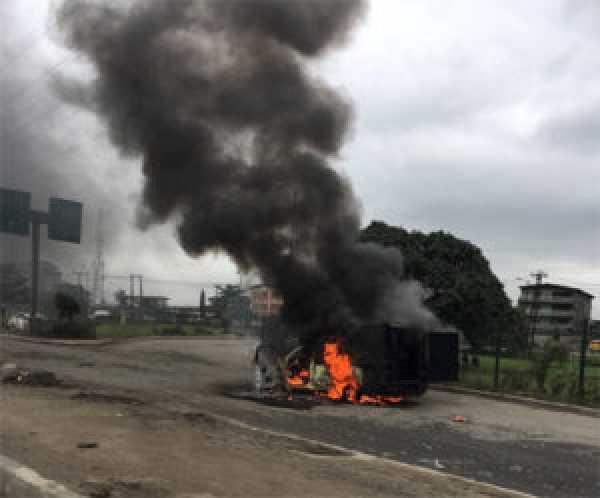 A bullion van loaded with an unspecified amount went up in flames Tuesday under Ojota bridge, Lagos

Report said that the van was driving inward toll gate, apparently to disburse the money in some banks when the unexpected happened.

The exact cause of the fire which occurred at about 2.30pm could not be immediately ascertained.

An eye witness , Mrs Moji Maitani, said: “I was driving home when all of a sudden the vehicle directly in front of me veered to another lane. I quickly applied the break to avoid what the motorist attempted to dodge, only to discover that a vehicle was on fire. On further observation, it was discovered to be a bullion van. Its occupants rushed out and were flagging other motorists to demand for fire extinguisher. But I could not stop, in order not to be trapped in any disaster.”

Some eye witnesses said that the money stalked inside the van was completely burnt as the escorts could not go near the van, owing to the flames. Others however, said that some cash was evacuated before the van was engulfed by fire.