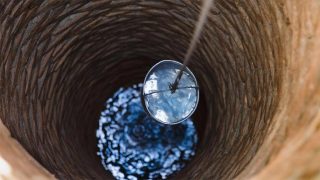 An open well in Lagos

An unidentified man has drowned in a well at Orile-Iganmu area of Lagos, Southwest Nigeria.

The 28-year old man was brought out of the well dead. The deep well is located at Adisatu Street, opposite Orile-Iganmu Police Station.

Director, Lagos State Fire Service, Rasak Fadipe confirmed the tragic incident, saying that the man was drawing water from the well when he slipped and fell inside.

He said the man also had a health challenge and that he was using a heavy bucket to draw water from the well when he fell inside and was brought out dead.

He further advised Lagosians not to use light bucket to draw water from the well instead of heavy ones, adding that the fire service should be contacted immediately when anyone mistakenly fell inside a well.