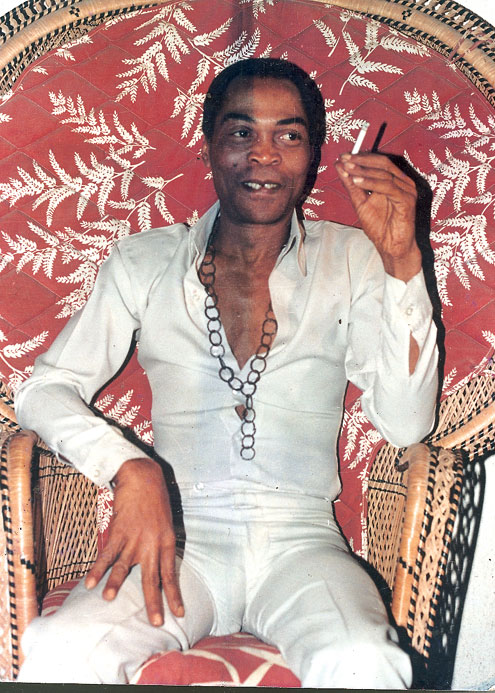 A musical about Nigeriaâ€™s most famous musician Fela Kuti is proving to be a surprising hit on Broadway, despite the lack of big stars or hit songs.

There is a moment in the show when Fela encounters an African-American woman named Sandra on a visit to Los Angeles.

As they share their respective experiences – she as a child of the American civil rights movement, he as an activist against his countryâ€™s military dictatorship – their flirtatious, politically-charged banter heats up.

Soon they look admiringly at one another with the same realisation: â€œWe have a lot to learn from each other.â€

To a New York audience including many Africans and African-Americans, the scene was sublime. After the laughs subsided, one could almost hear the smiles.

The play, titled simply Fela! is full of such moments.

During the course of a free-flowing two hours and 20 minutes, the audience is treated to an innovative mix of biography, music and dance.

The stage, set up as an approximation of the Shrine, his Lagos nightclub and community centre, is where Fela – who is played by two actors – narrates his journeys to far-away lands both geographical and spiritual.

Felaâ€™s journey to the spiritual world was particularly enjoyable for Kunle Ade, a Nigerian musician and fashion-designer based in New Yorkâ€™s hip Fort Greene neighbourhood.

â€œWhen Fela chants, it is really spiritual and deep. The producers knew what they were doing, and respected the material enough to guide it a certain way,â€ he says.

At other times the performers and the renowned Brooklyn-based afro-beat band, Antibalas, join Fela in electrifying renditions of his hits.

In one memorable number, the audience is treated to an interactive lesson into the mechanics of â€œbreaking it downâ€. For those not familiar with performing concentrated pelvic movements, Fela explains that it is no more complicated than trying to feel the beat.

The original Shrine was closed soon after his death in 1997, but the playâ€™s director and choreographer, the renowned Bill T Jones, does an extraordinary job of crafting an immersive experience. As the performers by turns sit, interact and walk about the stage before the performance and during its intermission, one imagines that is exactly what the Shrine was like in its heyday: a place to hang out and share ideas.

One of those ideas was the vital role women play as both mothers and labourers in Nigerian society.

As the play narrates, Felaâ€™s mother Funmilayo, even after her death at the hands of the countryâ€™s military government, played a critical role in her sonâ€™s life.

His wives, or â€œqueensâ€, as he refers to them, are depicted as regal, dignified companions.

Others, however, have criticised the play for this. Fela, in fact, married 27 women in 1978 before he adopted a rotating system of 12 wives. In the play, he is able to explain his life choices, but the women are silent.

But for Wahala Temi, a female visual artist based in the New York borough of Staten Island, Felaâ€™s gender consciousness was well-represented.

â€œHis mother was a freedom fighter, and his intention was to keep his wives safe.â€

Other points of controversy in the musicianâ€™s hard-partying life are glossed over.

Copious drug use is rendered as an unequivocal moral right. There is no mention of him describing condoms as â€œun-Africanâ€ and calling Aids a â€œwhite manâ€™s diseaseâ€, even though it tragically took his life.

Felaâ€™s contentious views were opportunities to offer the viewer a more well-rounded view of his character, yet the show unfortunately misses them amidst the feel-good atmosphere.

To be sure, the play appeared to have long odds at success.

Even with the endorsement of celebrity producers Sean â€œJay-Zâ€ Carter, Will Smith and Jada Pinkett-Smith, Broadway is a notoriously brutal place for new musicals – especially one with no big stars in the cast and no widely known pop hits.

Yet since it began its run on Broadway last November, the show has thrived.

And it is due to cross the Atlantic for a run at National Theatre in London in the autumn.

Kevin Mambo, one of the actors who plays Fela (owing to the demands of the role, he alternates performances with Sierra Leonean-American actor Sahr Ngaujah), says: â€œThe response has been more overwhelmingly positive than I could have expected.â€

He tells the story of the time he saw an octogenarian couple walking out of the show crying. Mambo went over to ask after the couple.

The man responded: â€œEverything is fine, but we have been going to the theatre for 40 or 50 years, and that was one of the most important things weâ€™ve seen.â€

The show, and Felaâ€™s life, has also resonated with Mambo himself.

As a Zimbabwean-Canadian, who is both globally aware but also proudly African, Mambo thinks of Fela and himself as â€œAfropolitansâ€.

â€œTo have this artist here whose success is built on the hybridisation of funk and jazz sounds from Africa and the diaspora made a lot of sense to me in terms of my own experience.â€