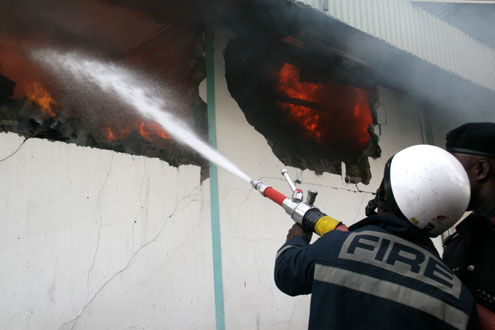 Fire fighters from the Lagos State Fire Service were seen combating the inferno at the time of filing this report.

Huge smoke was seen billowing from the factory while workers were seen running out to save their lives.

The cause of the fire and extent of damage could not be ascertained at the time of filing this report, although property worth billions of naira were said to have been destroyed.

Some factory workers, however, told P.M.NEWS that the fire outbreak could have been caused by welders who worked close to the compuleb section, i.e. the IT section where computers and other gadgets are stored.

Mr. Dayo Akinola, the companyâ€™s assistant financial manager told P.M.NEWS that the laptops burnt were worth billions of naira and that they were the latest brand called Ferrari laptops.

Tissue paper is manufactured in the factory owned by expatriates. Motorcycles are also assembled there.