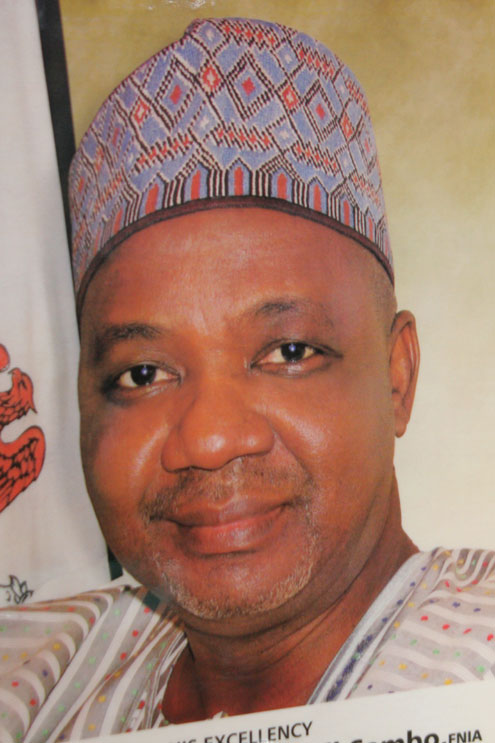 A man who wrote a petition against Namadi Samdo, the Vice President-designate and erstwhile Governor of Kaduna State, has cried out that security agents are after him.

According to the man, Sadau Garba, who accused Sambo of involvement in N153 billion contract scandal, the governor is using the State Security Service, SSS, to harass him because of the petition.

Garba, who is a lawyer based in Kaduna, in a paid advertisement published in a national newspaper today, titled â€œMemo To EFCCâ€ with copies to President Goodluck Jonathan and the National Security Adviser, said: â€œWhile my petition (which he wrote last year) is still pending with you, the Kaduna State Governor (Namadi Sambo) found a willing and easy tool in the person of the Kaduna State Director of SSS to coerce, intimidate and frustrate me for daring the State Government. He invited me to his office and subjected me to utter degrading and inhuman treatment for three days…â€

Similarly, a group known as Kaduna Rescue Mission, has also condemned the selection of Sambo as Vice President designate.

The group in another paid advertisement published in a national daily, queried the criteria used in picking Sambo as vice president, saying he does not deserve the job.

The group in their petition titled: â€˜Namadi Sambo As VP: A Celebration of Mediocrityâ€™, said: â€œThe question that has kept on agitating the minds of many people is: â€˜on what basis?â€™ The general pattern of thought and belief in the state is that the last three years, during which Sambo has been in charge, have been the worst period in the history of the state. So the question is what is he expected to bring to the office to which he is being catapulted? The maxim that says â€˜you canâ€™t give what you donâ€™t haveâ€™ is dead on target here. At a time when Nigeria is laying claims to wanting to join the league of developed nations, isnâ€™t it apt that the youths of the country, particularly, are impressed on the imperatives of meritocracy so that all will work hard to strive for excellence, instead of lying down expecting their interests to be taken care of by â€˜luckâ€™ or some permutations of vested interests?

â€œBut we dare say, that no state has suffered the reversal of fortunes that Kaduna has been subjected to in the past three years. It is on record that the Kaduna State Government has, from May 2007 to date collected from the federation account resources in excess of N140 billion, (this is more than the immediate past administration collected in its entire two-term tenure of eight years), yet people are still waiting for the day theyâ€™d be told what has happened to such unprecedented receipts. By the way, this figure does not include internally generated revenue, which is a closely guarded secret in the state. We make bold to say that in spite of such humongous amount of money there is not a single worthy project that has elicited the excitement of the people. The only project over which staggering sums are being sunk is the construction of a new Government House, which is said to have so far gulped closed to N10 billion, at a time when there is no water, education sector is crying for a lifeline, medical services are in disarray and all other crucial sectors are yearning for attention.

â€œSince his assumption of office, Government House Kaduna has become some sort of garrison and a generally hostile environment. Even commissioners, members of the State House of Assembly as well as other government appointees donâ€™t have direct access to the governor. Arc Namadi Sambo has also been an absentee governor. He comes into town on Tuesday and by Thursday he is gone. This makes it impossible for even statutory and conventional meetings like the weekly Executive Council and Security meetings to hold regularly. No doubt that has affected the smooth running of government business.

â€œNo doubt after the shock that came with the speculation of Namadiâ€™s ascension to the office of the VP, many people have been trying to give a positive interpretation to the development. Many believe that it is Godâ€™s way of answering the desperate prayers of the majority of the people to remove the plague that this three year-experience has turned out to be. To many therefore, this may be the good riddance they have been patiently waiting to celebrate in 2011. It is such a good bonus that it is coming earlier. But we believe the issue goes beyond the celebration of redemption in Kaduna. The question is, should this plague be allowed to infect the entire country?â€

The paid advertisement was signed by Abdulkadir Magaji.

Reacting to Garbaâ€™s allegations, the Senior Special Adviser to Governor Sambo on Media, Umar Sani, told P.M.NEWS that all the allegations were unfounded.

He described Garba as blackmailer and an extortionist who was dismissed from the Kaduna Polytechnic where he was a lecturer for sexual harassment and collecting money illegally from students.

Sani said Garba has no reputation and that he was also involved in a scandal at a school in Gwazar, adding that the petition he sent to the EFCC does not amount to anything and that his campaign of calumny is an exercise in futility.