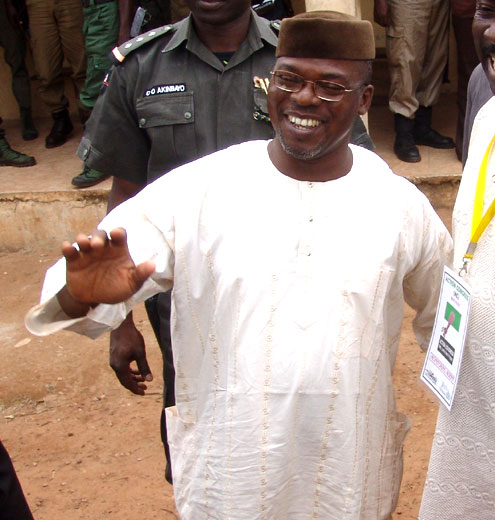 Joined in the suit is the Secretary of Oyo State chapter of theNigerian Union of Journalists (NUJ), Mr. Cosmos Oni.

In suit number I/1147/09 filed by Otunba Kunle Kalejaiye (SAN)Â  on behalf of Messrs Sola Adeyemo, Ademola Babalola, both of the Nigerian Compass, Oladele Ogunsola, Daily Independent, and Ade Adeloye of the Nigerian Herald, the plaintiffs are claiming the sum of N500 million as damages they suffered by the humiliation, stress, mental torture, disgrace, loss of estimation and assault, when Ojo-Lanre and Cosmos Oni falsely and maliciously procured the police to batter, assault and arrest them upon a false charge of armed robbery which the defendants made to the police on or about 25 July, 2009.

Also, the four journalists in the suit filed on 6 March this year in Oyo State High Court, prayed for an order of perpetual injunction restraining the defendants jointly and severally from further accusing, imputing or ascribing or lodging false criminal charges and complaints against them with the police or any other security agency.

They want the Court to declare that the diverse telephone calls made by Ojo-Lanre, who was then the Chairman of the NUJ in Oyo State and Cosmos Oni to the police on 25 July, 2009 whereby the defendants falsely and maliciously accused the plaintiffs for armed robbery, is irregular, malicious and unlawful.

The plaintiffs averred that they went to the press centre on 25 July, 2009 to attend the monthly congress of NUJ, Oyo State Council which every practicing journalist in the state attends by virtue of their individual membership of the NUJ, they severally or jointly had rights to attend.

The plaintiffs declared that when the meeting was in progress, the first and second defendants jointly and severally, falsely and maliciously made telephone distress calls to the police at the Central Police Station, Iyaganku, Ibadan to effect that the Press Centre, Iyaganku, Ibadan, was under attack by armed robbers.

While acting upon the false and malicious calls of the defendants, the police from the Iyaganku descended with full police might upon the press centre to crush the “armed robbery attack” reported by the defendants.

The plaintiffs averred that they were shocked when the defendants pointed them out to the police as the “armed robbers” who had come to attack the Press Centre.

That the police in response to the false identification of the plaintiffs and apparently happy that they were able to catch armed robbers in action brutalized, assaulted and battered the plaintiffs with gun butts, batons and teargas.

The plaintiffs further submitted that one of the police officers, Sunday Afolayan, corked his gun and wanted to shoot the plaintiffs but for the quick intervention of his superior.

Reacting to the libel suit on phone, Ojo-Lanre and Cosmos claimed ignorance of the development, saying that what happened was a union matter and it has been resolved at the union level.

Ojo-Lanre said: â€œWhat we journalists are doing to ourselves is ridiculous. People are reading us and we should learn to be mature and do things properly. Anybody is free to go to court.â€

Cosmos said: â€œWhat they have done is wrong and it is against the directive of the national body which has waded into the matter and resolved it. I am surprised at this. However, I have not seen any summon from them. We are waiting for their summon and when we get it our lawyers will react to it. We are prepared for anything.â€