Namadi Sambo Sworn In As VP 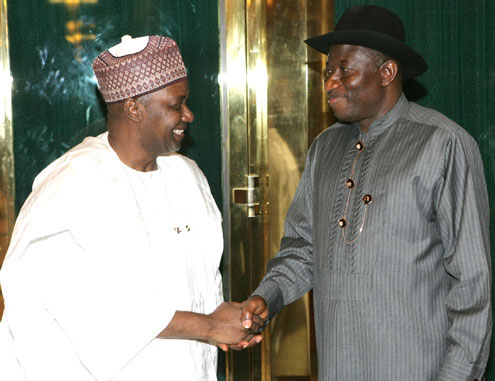 All is set for the swearing in of the new Vice President, Namadi Sambo, today in Abuja.

Though earlier reports indicated that the swearing in ceremony would take place before the commencement of todayâ€™s meeting of the Federal Executive Council following Samboâ€™s confirmation by both chambers of the National Assembly yesterday, P.M.NEWS, however, observed that there was no sign of any of such ceremony at the Presidential Villa this morning.

The Federal Executive Council meeting being presided over by President Goodluck Jonathan kicked off some minutes after 10 this morning without any mention of the swearing in of the new vice president.

A source at the Aso Rock Presidential Villa told our correspondent that the swearing in ceremony of Sambo will now take place at 4 p.m. today. No reason was given for the delay in the swearing ceremony as at the time of writing this story.

Sources, however, told P.M.NEWS that the decision to shift the ceremony forward may be partly related to the need to allow both chambers of the National Assembly to adopt proceedings of the confirmation session of yesterday during their plenary today.

The House of Representatives, which conducted a very rowdy proceedings yesterday, was especially expected to adopt the minutes of its session which was abruptly brought to an end yesterday. This will give the proceedings a legal backing.

Meanwhile, P.M.NEWS gathered that the tension that has pervaded the city of Kaduna since the nomination of Sambo has been dissipated, though it was learnt that there is a fresh anxiety that violence may erupt in the ancient city after the swearing in of the new vice president.

It was gathered that the police have been put on high alert while government officials are doing everything possible to persuade those aggrieved by the impending swearing in ofSamboâ€™s deputy, Patrick Yakowa, as governor tomorrow, to sheathe their swords and allow peace to prevail in Kaduna.

Some muslim fundamentalists have been sending text messages to fellow muslims around the city on the need to resist theswearing in of Yakowa, a Christian as the state governor and this has brought tension to all time high in the former Nothern region capital which has an unenviable history of bloody clashes between memebrs of both religious groups.

But government and some prominent islamic religious organisations have been trying to ensure that the swearing in of Yakowa does not lead to another ugly incident.

In text messages being sent around the city, some muslim organisations not only called on their fellow muslims to support Sambo, they also warned them not to bring the religion into disrepute by embarking on violence over Yakowa coming to power which they said was a pure constitutional issue.

The Arewa Forum is also preaching peace in a text meesage it sent to people in Kaduna yesterday.

One of the text messages reads: â€œIslam is peace, why allow its name to be dragged in the mud? Islam is justice for all, why allow the unjust to mislead us? Support the new vice-president for peace and justice to reign.â€

P.M.NEWS reporter in Kaduna, however, said inhabitants of the city are looking forward to the formal swearing in of Sambo and Yakowa with trepidation.