Christian Governor Takes Over In Kaduna, Security Beefed Up At Govt House 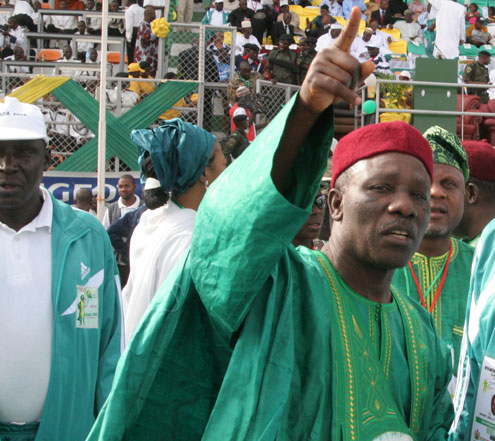 There was heavy security presence around the Government House in Kaduna this morning as the first Christian governor of the state, Mr. Patrick Ibrahim Yakowa, was about to be sworn in at the time of filing this report.

Dozens of anti-riot policemen in battle gears were seen in and around the Government House in armoured and personnel carriers to forestall any outbreak of violence during the ceremony.

Also in a bid to ensure peace in the state, leaders of the Jamaâ€™atu Nasril Islam, JNI, Christian Association of Nigeria, CAN, and Arewa Consultative Forum, ACF, in separate statements, have called for peace. They appealed to residents to accept Yakowaâ€™s elevation to the status of a governor as an act of God.

The appeals are coming on the heels of palpable tension in the state following threats by some Muslim fundamentalists to stop Yakowa from being sworn in as governor of the state. It was gathered that some groups of Islamic fundamentalists were unhappy that a Christian governor would be empowered to run the affairs of the state they referred to as the political headquarters of the north and a Muslim-dominated state.

P.M.NEWS investigations revealed that the fear of violence by Muslim fundamentalists during and after the swearing in ceremony has forced many traders, students and workers to remain indoors. However, the police have assured citizens of their safety during and after the exercise.

Police Public Relations Officer, Lawan Aminu, described as a mere threat statements by fundamentalists to cause mayhem in Kaduna, saying the police will leave nothing to chance in maintaining peace during and after the swearing in.

â€œPolice are on top of the situation. We assure people of the state that the swearing in will be hitch free,â€™â€™ he told P.M.NEWS.

Meanwhile, the Governor-designate has appealed to residents that he would be fair to all.

â€œThough I am a Christian, leadership is about providing good governance,â€™â€™ he said.

Until his elevation, Yakowa was a detribalised and loyal deputy governor who has the requisite experience to govern the state.

He was first appointed to serve with the then Governor Alhaji Mohammed Makarfi as deputy governor in July, 2005 after the death of Stephen Shekari.

He was born on 1 December, 1948 in Fadan Kagoma, Jemaâ€™a Local Government Area of Kaduna.

Yakowa attended Saint Maryâ€™s Secondary School , Kaduna and was later admitted to the Ahmadu Bello University, Zaria, where he graduated with a B.Sc Social Science in June 1972 .