Chicken With Four Limbs In Ogun 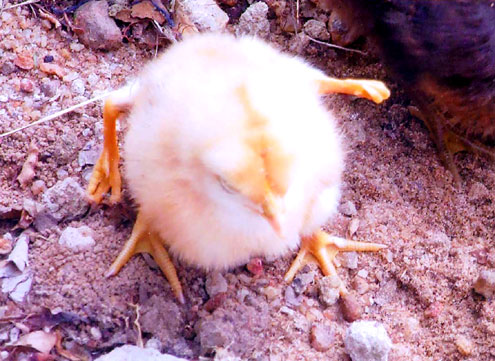 Residents of Ojuore in Sango area were amazed when a chick with four limbs was hatched by a mother hen last Sunday. And the ever superstitious neighbours suspected it was an act of wizardry by the chicken farmer who is simply known as Bola City.

The incident, it was learnt, happened at about six oâ€™ clock in the evening. Residents who witnessed the incident were scared of moving close to the chicken farmer for they suspected he must have bewitched the hen which hatched the four-limbed chick.

Even pregnant women who lived in the same compound with him were said to have deserted their homes because of fear.

Bola City was said to have been forced to vacate his house due to the suspicion and commotion that were generated after the incident.

Mulikat Ajala, a neigbour of the chicken farmer said: â€œin fact, this is unbelievable because it has not happened before. But I am not surprised because the man (the chicken minder) had been behaving strangely. And for his hen to have hatched a chick with four limbs means he could be a wizard. In fact, I cannot allow my children to move closer to him lest he bewitch them.â€

Some Christian as well as Islamic faithful seized the opportunity to preach that people should turn to God, saying that the incident had some spiritual significance.

Experts, however, said the chicken suffered from genetic disorder before it was hatched.