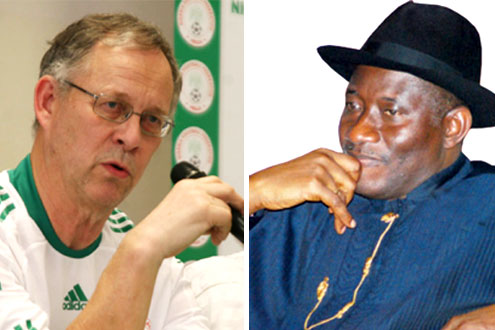 Technical Adviser of the Super Eagles, Lars Lagerback made an instant impression on members of his squad when he met them for the first time yesterday afternoon in Abuja.

Lagerback, appointed in March to replace Shuiabu Amodu, was introduced to the squad by NFF President Sani Lulu Abdullahi, and immediately proceeded to shock the players by calling each by name and then showing them individual video highlights of their performances. The players were so amazed to see Lagerback, who has not spent much time on the job interacting with them as if they had been together for long.

â€œWhen I saw the video, it was unexpected. But it shows he has been doing his homework,â€ the Lokomotiv Moscow forward told KickOffNigeria.com.

But it was not only at the team meeting that Lagerback won brownie points with his players. His training session was also well received.

â€œThis first session was very important, and the way he talked to everybody, I can say that every one of us enjoyed it. And we are ready to work and to give hundred per cent,â€ Kanu said.

â€œIt was fantastic, we were relaxed. It was almost like he had been in Nigeria for one year already. Now, the most important thing is for us to work and make sure that we can do what he wants us to do.â€

His assistant Joseph Yobo agreed. â€œI think it is good for the first day. His pedigree speaks for itself. Heâ€™s been coaching Sweden for a long time. Hopefully, he brings that experience here.

â€œEveryone enjoyed the first training session and we are all looking forward to the remainder of the time and what he will bring.â€

The teamâ€™s honeymoon period continues today as the squad get down to the grind with a closed session in the morning.

Meanwhile, at least 23 players were in the camp as at yesterday when they had a light training session and interaction with their foreign trainer.