Fashola Swears In Ogunlewe As HOS 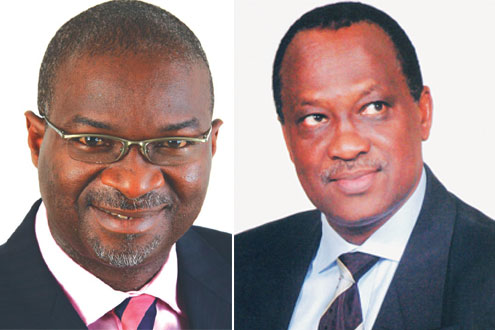 Govenor Babatunde Fashola of Lagos State, Nigeria today swore in the new Head of Service, Mr. Adesegun Ogunlewe, with a charge on him to reposition and move the civil service to greater heights.

He urged himÂ  to live by example and carry the civil servants along in the discharge of his duty. He also urged him to be above board at all times.

The new HOS promised to work harder to ensure that he moved the civil service to greater heights.

Ogunlewe was announced HOS by Fashola on Friday evening to replace the former HOS, Alhaji Yakub Balogun who retired voluntarily over a week ago.

The new HOS was first seen at the commissioning of the new palace of the Oba of Lagos by Fashola yesterday where he was first introduced to the gathering as the new number one civil servant.

He is expected to address top public servants later in the week on how to bring in innovations into the civil service to make it more efficient and vibrant.

Fashola had in a statement signed by the Commissioner for Information and Strategy, Mr Opeyemi Bamidele, announced Ogunlewe as the new HOS.

Ogunlewe was born into the Fadugba-Ogunlewe royal family of Igbogbo in Ikorodu Local Government Area of Lagos State on 16 October, 1953.

He attended United African Methodist Church Primary School , Igbogbo between 1959 and 1964 and Oriwu College between 1965 and 1969. In 1972, he passed the General Certificate of Examination Advanced Level and gained admission into the University of Ife now Obafemi Awolowo University, Ile-Ife in 1975.

He was awarded the Bachelor of Science degree in Sociology in 1978 and on the sponsorship of Lagos State Government, he returned to â€˜Great Ifeâ€™ for the Post-Graduate Diploma Public Administration (PGDPA) Programme in 1982/83 Academic Session.

Happily married and has children, Ogunlewe, who takes delight in walking, reading and listening to music, is a Fellow of both the Institute of Public Administration of Nigeria (IPAN) and Nigeria Institute for Training and Development (NITAD).