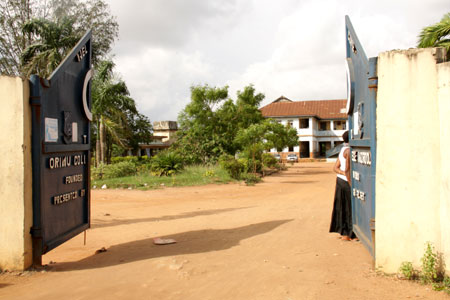 The students of Oriwu College in Ikorodu, Lagos, Nigeria, who were recently caught engaging in immoral conducts including having sex within the school compound and patronising witch doctors have been expelled.

Others, who P.M.NEWS learnt were not seriously implicated in the scandal, were suspended. However, the number students expelled and suspended could not be ascertained.

Apart from engaging in such sexual activities, the students including those who have not been caught, are said to watch pornography on their phones while teaching is on.

P.M.NEWS had, yesterday, reported that some of the students of the Junior Secondary School arm of the school, were rounded up about two weeks ago by the school authorities in a corner of the school where male and female students usually engaged in sexual activities.

The students were also said to have confessed to patronising witch doctors so as to remain immune from punishment.

Investigations revealed that the school authorities decided to send the students out of the school to serve as a lesson to other students.

The expulsion was also to stop the students from further influencing the boarding students of the school.

When P.M.NEWS correspondent visited the school, the principal, Mrs. R.A. Adesanya,Â  was said to be in a meeting with parents of the students apparently to find a lasting solution to the challenges bordering on immoral conduct facing the school.

A highly placed source within the school told P.M.NEWS that the students were expelled because they had become bad influence on the others and that since the school is famous, authorities would not want anything that would tarnish its image.

The source further said that the principal, who has been emotionally disturbed over the issue, has also warned other parents about their childrenâ€™s lateness to school.

She has also resolved that any student of the school not found worthy in character would be expelled.

â€œIn fact, she even called their parents today, told them about the studentsâ€™ behaviour and even informed other parents about the lateness to school of their children.

â€œSheÂ  also told them that if these children continued like this, she would send them awayÂ  not minding their scores in the examinations,â€ said a source who declined to be quoted.

Some of the teachers who spoke with P.M.NEWS attributed the moral decadence decadence in the school to lack of proper training of the children from home.

â€œWe try to train the ones with us and make them to be upright, but the day students mix with other students from other schools and come here to try to influence these ones,â€ a teacher said.

She also said that the school principal had continuously played her role positively in the lives of the children, adding that if the parents could complement the efforts of the teachers, the children would not engage in such acts.

The government has been doing its best to see to it that the children do not suffer in the nearest future, by educating them, she said.

To this effect, out of the six subjects they offer in class, the government provided four text books in four of the subjects. However, the teacher lamented that even to provide notebooks for the children to write on is a problem for the parents.

â€œThe children would not write in class because of lack of note books. During examinations, some of them would have to wait for their co-students to finish answering the questions so they can borrow writing materials from them. So the parents are not playing their roles,â€ she said.

The teacher said that part of the resolution reached at the meeting was that any student who comes later than eight in the morning was now going to face sanctions.

â€œParents need to be talked to, they need to be advised on how to take care of their children,â€ she added.

â€œYou can imagine some of the students watching pornographic films while the teacher is in the class teaching them. The schoolâ€™s principal has seized so many phones from these students. We have a big problem,â€ she added.