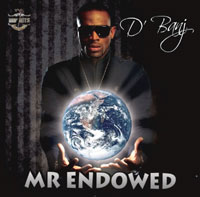 Coming a few weeks after the release of the musical video of his monster hit, Fall In Love, Kokomaster and Moâ€™Hitsâ€™ top gun, Dâ€™banj, has dropped his much anticipated single, Mr. Endowed from his upcoming album.

The new work was first played to the delight of international audience at the Hollywood, United States bash of Chris Aire, the celebrity jeweller.

In the new song, Dâ€™Banj shows that he always has a way with word play and this is no exception, coming over a strumming Don Jazzy beat.