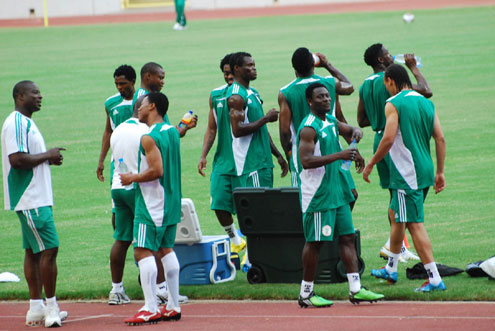 Nigeriaâ€™s Super Eagles endured a punishing schedule after their 0-0 draw against Saudi Arabia on Tuesday.

With time running out before the World Cup kicks off, Technical Adviser, LarsÂ  Lagerback is squeezing every second of training out of the players to whip them into shape.

After Tuesday nightâ€™s game, the squad left Austria yesterday, taking a three-hour drive to Germany, from where they flew nearly an hour and a half to London.

That was followed by a two hour drive to Essex. The players then enjoyed a three-hour rest, before being shepherded to the training ground for one and a half hours of training.

And the pace does not let up today, when two sessions have been scheduled by Lagerback and his crew, although the players will be broken up into two groups.

One group will train at the morning session, while the other group goes for the afternoon session.