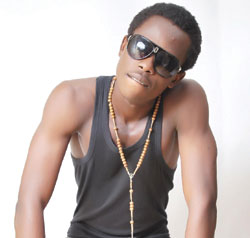 Muyiwa Gregory a.k.a. Ash, a Lagos-based hip hop artiste, is a new sensational singer, whose debut songs, Bonkoni and Fenuse, are currently being promoted.

Bonkoni is another name for the backside of a beautiful damsel and while Nigerian artistes have the attribute of dropping various slogans, it is a new street slogan in vogue.

Explaining his entry into the music industry having come from a family that is musically oriented, Ash said he got massive support from his physiotherapist mother, Mrs. Folashade GregoryÂ  and typical of street folks, he desires for shows and concert to showcase his musical prowess.

He also wishes to perform on the same stage with bigwigs like Drama, Zee-world, Odreel, Banton, having also been prodded by Eldee-d-don, Ruggedman and 502, to mention a few.

Most of his tracks are produced by Mac-J, who is also the handler of most of Mode-9â€™s songs, while he is being promoted by Brainwave Entertainment.

His role model in the industry include John Legend, Michael Bolton, Tu-Face, AshaÂ  and Lami Phillips.