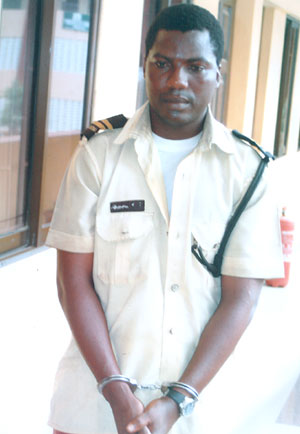 Another fake officer of the Lagos State Traffic Management Authority (LASTMA) has been arrested by the police at a beer parlour at Mile 2 area of Lagos State, Nigeria.

Mr. Akanni Olufemi, the suspected fake LASTMA officer was handcuffed by the police after his arrest, which was effected as he was said to be drinking beer at the beer parlour on Wednesday.

He has been detained at the Lagos State Taskforce office, Alausa, Ikeja, where he will be charged to court.

Olufemi did not deny that he was a fake LASTMA officer, but confirmed that he used the uniform to extort money from road users in the area.

The 35-year old man was an employee of LASTMAÂ  in 2006 and was dismissed in 2007 for allegedly stealing car tapes of an impounded vehicle at the LASTMA headquarters, Oshodi.

An indigene of Oyo State , the suspect said he also wore the uniform to trade between Lagos and Badagry where he buys second hand clothing and to avoid paying transport fares.

Special Adviser to the Governor on Transportation, Mr. Kayode Opeifa lamented the proliferation of fake LASTMA officers who extort money from the public and called on the public to beware of such people.

Two months ago, a fake LASTMA officer, Mr. Abayomi Tom Dollar was arrested around the National Youth Service Corps (NYSC) camp in Agege for extorting money from unsuspecting road users, while his case is till pending in the court.

He was accused of printing fake LASTMA forms which he allegedly used in trying to recruit fake LASTMA officers and collected N5, 000 for each form from desperate job seekers.