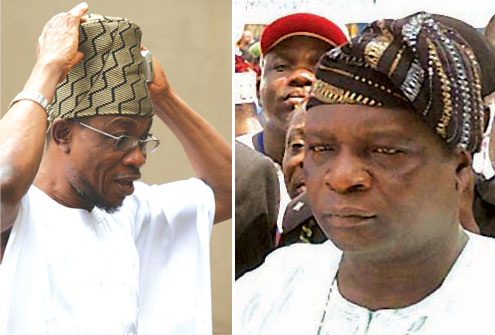 In a judgment that lasted about three hours, the tribunal held that the petitioner failed to prove his case beyond reasonable doubt that election malpractices took place in 10 local government areas.

The Chairman of the tribunal, Justice Garba Alli said that all the allegations in the petition which include over voting, sporadic shouting and killing of voters could not be proven at all.

â€œHe did not bring a ballot box before the tribunal to prove that ballot boxes were snatched.

â€œThe tribunal cannot attach and will not attach importance to the allegations levelled against the election. Weight cannot be attached to the witnesses of the petitioner because they were all mere allegations.â€

Justice Garba stated that documents tendered in the petition could not be linked to the case. He ruled that Aregbesola also failed to prove beyond reasonable doubt that there was non-compliance by Oyinlola to the Electoral Act.

Finally, he resolved the two issues in favour of the first respondent, Oyinlola against Aregbesola. He affirmed: â€œOyinlola is duly elected as governor of Osun State.â€

While the counsel to Oyinlola commended the judgment, counsel to Aregbesola stated that the battle had just begun. They vowed to appeal against judgment.

In response, Justice Garba asked them to go to the Court of Appeal.

Meanwhile, supporters of PDP took to the streets to celebrate the verdict.