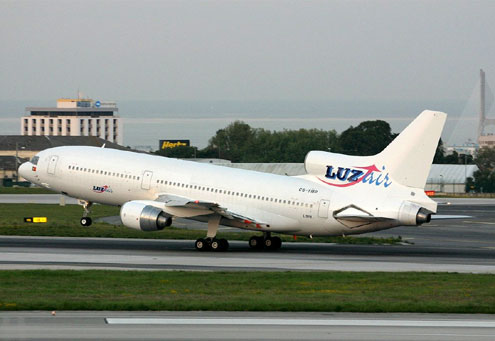 P.M.Sports gathered that the Nigerian contingent, who were due to fly to South Africa last night for the World Cup finals were unable to leave London as scheduled.

Reports say the pilot of the Luz Air discovered a malfunction as the plane was about to taxi and quickly called the attention of his crew.

The Eagles skipper, Nwankwo Kanu and other 22 players, were still celebrating their inclusion in the final list released by the Technical Adviser, Lars lagerback, when their joy was cut short at the airport.

The Eagles Coordinator, Emmanuel Attah, while recounting the trauma that the team went through inside the plane said: â€œThe entire contingent was devastated when the pilot told us the flight would be aborted. It was unexpected because the players were already in great mood, singing competition songs as they were being checked in last night. But the tune changed to songs of praises to God immediately the pilot announced his predicament with the plane.â€

Attah, who described the development as very sad on a live Radio programme, Mega Sports from London early today, said the Eaglesâ€™ camp is calm and that the players are trying to put the incident behind them.

The Eagles Media Officer, Peterside Idah, who also spoke on the development, confirmed to kickoff.com that the NFF officials were forced to make an alternative hotel accommodation at the Radisson, close to the London airport immediately after the botched flight. New flight arrangements were being made at press time.

â€œWe were at the airport and had all checked in when the pilot reported that he had noticed a red light on his controls. He said he was not sure what the exact problem was, and could not risk the lives of the Nigerian squad. So, he opted to ground the flight while the engineers tried to establish what the problem is,â€ Idah said.

It was further gathered that the Nigeria Football Federation, NFF President, Alhaji Sani Lulu addressed the squad before they went to bed, assuring them of the nationâ€™s resolve to give them an enabling environment during and after the World Cup in South Africa.

The NFF was working on an alternative travel arrangement to fly the contingent to South Africa as at the time of filing this report this afternoon.

Meanwhile, the Eaglesâ€™ regular goalkeepers; Vincent Enyeama of Hapoel Tel Aviv, Israel, Dele Aiyenugba of Bnei Yehuda, Israel and Austin Ejide also an Israeli based keeper with Hapoel Petach Tikvah, made Lagerbackâ€™s 23-man squad that would represent Nigeria at the World Cup. With the exception of four players, Haruna Lukman (AS Monaco, France), John Utaka (Portsmouth, England), Ayodele Adeleye (Sparta Rotterdam, Netherlands) and Rabiu Afolabi (SV Salzburg, Austria), the remaining 19 players included in the final list were drawn from the squad paraded at the Angola 2010 Cup of Nations in January. See page 15 for the full Eagles squad to South Africa.