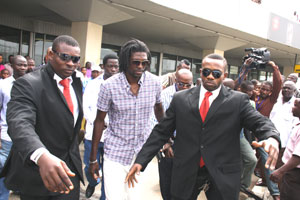 The Togolese star is in Lagos as a guest of Governor Babatunde Raji Fashola and the BRF Youth Football Academy.

Adebayor was received on arrival at the airport by the students of the academy, who were so excited to see the former African Footballer of the Year live in Lagos. Adebayor later headed for the Sheraton Hotel in Ikeja, Lagos, where he was scheduled to address a world press conference.