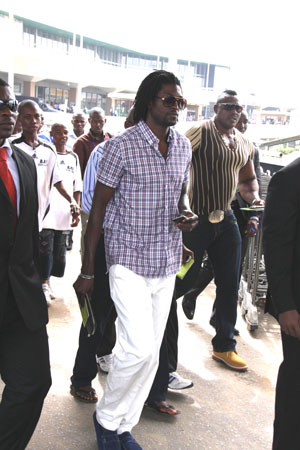 Despite playingÂ  for his adopted countryâ€™s team, the Hawks of Togo, beforing calling it quit with international football, Manchester City of England forward, Emmanuel Adebayor has said that he would be rooting for the Super Eagles at the South Africa 2010 World Cup, which kicks off next week.

The former, Arsenal FC of England striker gave this indication yesterday at the Sheraton Hotel, Lagos, Nigeria, venue of a reception held for him by the Babatunde Raji Fashola, BRF, Academy. Adebayor said although he would not be participating at the Mundial but he would still be cheering the country of his birth, Nigeria to victory. The striker, who announced his retirement from international football after the Togolese national team were attacked on 8 January in Cabinda, Angola on their way to the last African Cup of Nations, said he would be the twelfth player for the coach Lars Lagerback-tutored side. He also urged Nigerians not to boo their darling team. Rather, they should support them even when they are not playing to their delight.

On the Super Eagles chances of clinching the coveted trophy, Adebayor said Nigeria is blessed with talented players but stressed that the time for preparation is too short, though with commitment on the part of the players they can still spring surprises.

â€œI know Nigeria has good players that I have played with or against, the likes of Osaze Odenwingie, Obafemi Martins, Kanu Nwankwo and others, I believe they can do well but the administrators must also be up and doing. I also want to wish them the best,â€ he added.

He urged the team to listen to their coaches because they are at the helms of affairs and would know the best tactical approach in match situations. â€œI have played under 12 managers and they are like fathers to me. If the players can listen to the coaches, I see the teams representing Africa going all the way.â€

The 25-year-old lanky forward said he believes in the ability of an African team to lift the senior World Cup holding on Africaâ€™s soil for the first time but warned that if the attitude of the football administrators does not change,