Imoke, Duke In Fight To Finish 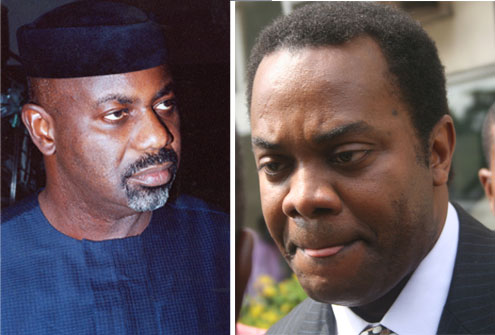 The rift between Senator Liyel Imoke, governor of Cross River State, Nigeria and his predecessor, Mr. Donald Duke is taking a turn for the worse.

The strained relationship was noticed following the defection of Duke from the Peopleâ€™s Democratic Party, PDP. He is said to have joined the Labour Party on whose platform he wants to actualise his 2011 presidential ambition.

The rift took a turn for the worse days ago when a team of anti-riot policemen from the state Police Headquarters, Diamond Hill, calabar, disrupted a gathering of dignitaries at the former National Republican Convention, NRC, building in Calabar for a commissioning ceremony.

Duke had converted the building to a women and children hospital and was to commission the centre that day when the police stormed the place.

Although the disruption was attributed to the rift between Imoke and Duke, Mr. Patrick Ugbe, the Chief Press Secretary to the governor has debunked what he called â€œinsinuationsâ€ that the disruption was â€œbeing orchestrated by the administration of the Governor, His Excellency Senator Liyel Imokeâ€.

According to Ugbe, the issue of the ownership of the Women and Childrenâ€™s Hospital was taken to court by a private citizen of the state, Mr. James Ebri, a governorship candidate of the African Renaissance Party (ARP) in the April 2007 election in the state.

â€œIn his suit, the Cross River State Government, the Attorney-General of the State and the Commissioner for Lands are all joined as co-defendants. So we wonder His Excellencyâ€™s involvement in the matter.

â€œSince the matter is already before the court, the state government will not make any comment, as this would be subjudice. We shall let the court decide on the matter.â€

Ugbe also rejected claims that the Imoke administration was in any way probing the government of his predecessor. â€œEven when there has been a huge clamour for a probe, the governor has always maintained that such an exercise would only cause a distraction from the sense of purpose in service delivery.

â€œThe fact that Duke has left the PDP to pursue his presidential ambition elsewhere will not in any way cause any friction between him and Imoke,â€ Ugbe concluded.

The rift between Imoke and Duke has equally been accentuated by the huge debt left behind by the Duke administration. The Cross River State government reportedly shells out N700 million monthly to pay debts. Observers say this is quite a colossal amount considering the fact that the state gets a paltry N1.2 billion as federal allocation, with the balance of N500 million after the deduction not even enough to pay salaries of civil servants in the state.

The huge debt incurred on the multi-billion naira Tinapa project appears to be an albatross the Imoke administration inherited from Duke and this has been bogging down the current administration.

Governor Imoke has also bemoaned the performance of his executive council members, saying it is way below average as most of them are often at a loss on the policy direction of his administration.

He, however, ruled out the likelihood of an outright dissolution of the executive council because, according to him, â€œa cabinet reshuffle will bring in new hands that will need orientation which will take about one year and we are not prepared for that at this timeâ€ .

The governor explained that what he needs at the moment is a quality spread in the interest of the party so that it does not run into a difficult situation.Â  He inherited most members of the executive from Duke.

PDP stalwarts in the state are also not happy with Duke over the manner he allegedly disparaged the party in his resignation letter.

Duke accused elders of the party of emasculating it, rendering the party â€œdysfunctional, unable to articulate a road map and lead Nigerians on a clear and concise path to national renewal. Faithfulness and fervour have been dissipated by a seamless stream of internecine factional warfare.â€

Reacting to Dukeâ€™s unsavoury remarks about PDP, the state chairman of the party, Ekpo Okon, in a statement said Duke was offered the opportunity to rise to prominence â€œwithout giving back to the party,â€ adding that the contents of his letter of resignation were insincere.

The state chapter of the party said the reasons Duke gave for leaving PDP were selfish and self-seeking.