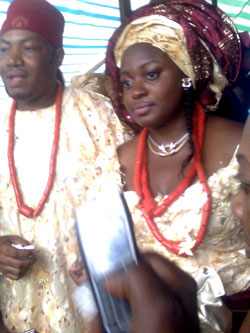 â€¢Ernest Obi and his wife

Some of the Nollywood stars that stormed the Obagoriola street, Alaba Lagos, venue of the ceremony, include Olu Jacobs, who was introduced as a movie hero that has conquered Hollywood and came home to conquer Nollywood and his wife, Joke Silver, who was also commended for her successful marriage to the star actor despite the widely belief that movie stars donâ€™t always have successful marriages.

Ngozi Ezeonu was the first Nollywood star to grace the occasion and she was welcomed in a grand style by friends and family of the bride. Segun Arinze was also in attendance. The Nollywood stars were given VIP treatment; they had a separate canopy in which Nollywood was written on it.

The event was spiced up by the brideâ€™s friends and family members, while Ernest Obiâ€™s daughter, Adaeze, took an active role at the event, ensuring that those who came for the wedding ceremony were taken care of.

Eviâ€™s beautiful friends were all over the venue; in fact, a separate canopy was given to her friends who came in their own Aso-ebi
Members and pastor of Royal Christian Embassy, the coupleâ€™s church, added glamour to the event.

One of the guests said Ernest and his wife are a close couple, having courted for over six years and adopted a daughter. After the marriage rites had been observed, the couple took over the dance floor.