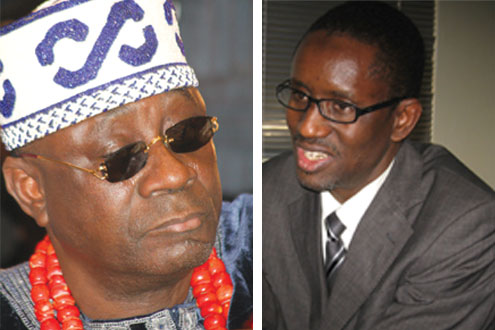 Speaking with P.M.NEWS at the 8th Convocation ceremony of Babcock University, Ilishan, Ogun State, where Ribadu was honoured with the honorary title ofÂ  Doctor of Law, LL.D, the Royal father warned him to particularly beware of Obasanjo.

Oba Akinolu, who described the honour bestowed on the ex-anti-graft agency Chairman as a very befitting one, said most of those who mill around the retired Assistant Inspector General of Police, IGP, are his enemies, stressing that all they were looking for is his downfall.

Says Oba Akinolu: â€œall I can advise Ribadu to do is to be very wary of those who surround him, especially Chief Olusegun Obasanjo.Â  All of them are enemies in friendâ€™s garb.

â€œMost of those you see around him today at this ceremony do not love him deep down, they are only here to register their presence under the pretence that they like him.

â€œI must reiterate my warning that he should be very careful with Obasanjo.Â  That man is dangerous. Ribadu should not allow him to stain his soaring image and integrity. A word is enough for the wise,â€ the retired Assistant Inspector General of Police, AIG, turned monarch warned.