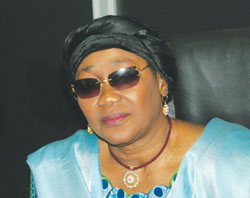 Farida Waziri, the Chairman of Economic andÂ  Financial Crimes Commission, EFCC said today in Abuja that she is not bothered by the return to Nigeria last Friday of Mallam Nuhu Ribadu, her predecessor in office. The anti-graft agency chairman also said the reception being given to Mallam Nasir El-Rufai, the former Minister of Federal Capital Territory, FCT who is presently being tried by the Commission in high places did not bother her.


A journalist had during a press conference organised to mark two years of the EFCC Chairman in office asked Waziri if she will still go ahead to resign from office if Nuhu Ribadu is appointed to supervise her office as she allegedly said on a national television programme some days ago. But Waziri refused to answer the question which she described as “speculative”.

In the same vein, the anti graft chief said the alleged “soft treatment” given to Mallam El-Rufai was because the former Minister came all the way from the United States to willingly submit himself to the Commission. She denied that the treatment given to the former FCT Minister was influenced by the presidency even as she was emphaticÂ  that President Goodluck Jonathan has never influenced any investigation being done by the Commission.

Meanwhile, Waziri has confirmed that even as the anti graft agencyÂ Â Â Â  begins to round up investigations into the 17.5million euro Siemens bribery scam, it has begun to probe another $15million transcontinental fraud case involving Daimler and Anammco automobile firms. â€œWe opened investigations into the Daimler/ Anammco scam recently following a judgment in the U.S. where some Nigerians were convicted in relation to the Daimler bribery scam. So far, we have interviewed about four officials and representatives ofÂ  Daimler and Anammco in Nigeria .

â€œWe have equally gone ahead to seek the assistance of the AGF to obtain the certified true copy of the US judgment through MLAT from the America authorities. We are working hard to see how we can crack some of these high profile cases with international dimensionsâ€.

Some of the officials of the firms involved who had so far been interviewed include Messrs Igwe Geofrey Onyia and Nathaniel Adimaje.

Speaking on her scorecard within the two years she came on board as the EFCC Chairman, Waziri said that she has fared very well. â€œWhen we gathered here this time last year, we told you that we were still battling all odds to institute some high profile cases. We can conveniently boast that while we inherited about ten high profile cases when we took over about two years ago, today, we have not only instituted over 50 high profile cases, we have equally secured more than 100 convictions with a record of recovery that towers above $3.5 billion and over 1200 cases pending in courts â€, she said.

Waziri said that looking back at what the Commission has attained in this short period,Â  she expressed gratitude to the media for their support to EFCC. â€œWe canâ€™t but thank youÂ  gentlemen of the press sincerely, from the depth of my heart for your assistance, support and cooperation which have made it possible for us to be able to point to tangible things we have done not only to promote the EFCC but to strengthen the anti-corruption war in the countryâ€.

She promised to continue to engage the media in more proactive ways in the work of the Commission. â€œWe would continue to support your work in the best possible way we can. And in this regard, I have decided to organize workshops for journalists in the six zones where we have our operations to enhance their knowledge and their understanding of the operations of the EFCCâ€, she promised.