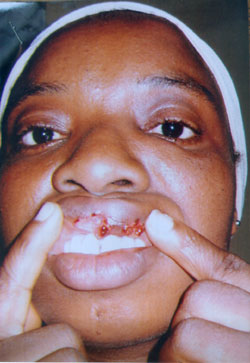 A 30-year-old housewife and caterer, Mrs. Arinola Azeez, is currently receiving treatment after being beaten up by her landlordâ€™s son.

The suspect Bolaji Kusimo, 32, a mechanic at Salolo, inherited a room in his late fatherâ€™s house at 3, Aduraleye Close, off Fabunmi Street, Meiran, Lagos. Crime Watch checks revealed that a minor argument had ensued between the suspectâ€™s wife and the victim.

According to Mrs. Azeez: â€œThere was a heavy rain penultimate week at 4.30 p.m, which led to our compound being flooded. I later swept everywhere and thereafter the landlordâ€™s son wife (Funke) poured dirt on the place I had cleaned up. When I told her that I had just swept the place, she flared up and called her husband who came out and started beating me, and later dragged me into his room.â€

â€œHis wife also joined in beating me before my husband who was sleeping woke up when he heard my cries and he came to rescue me.

According to the victimâ€™s husband, Mr. Olalekan Azeez, â€œthe police are afraid of this landlordâ€™s son. Can you imagine; after beating my wife with injuries in her mouth, he quickly dashed to Meiran Police Station and reported that his wife had lost a two-month-old pregnancy. When I was not satisfied with the way the police at Meiran and Area â€˜Gâ€™ Command, Ogba, are handling the case, I wrote to the Commissioner of Police and the case is now being handled by the O/C Provost. When the police gave us a note to go to Orile-Agege Hospital to ascertain whether his wife lost her pregnancy, she (Funke) refused to be examined.

At the hospital, the medical officer, Dr. Osinowo R.O, examined my wife and issued a medical report, dated 25 May, 2010, stating that: â€œOn examination, she was found to be conscious, her dress was soaked with blood. She had a swollen forehead with laceration of the upper lip, she was attended to and treatment promptly.â€