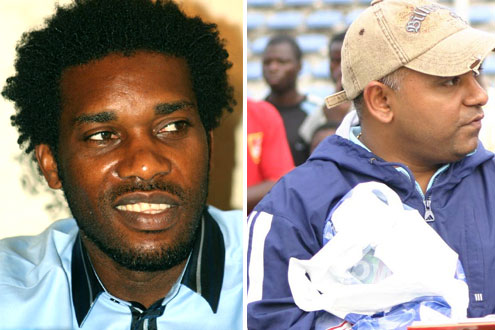 Okocha and Kalika: Beware of Argentina.

Erstwhile skipper of the Super Eagles of Nigeria, Austin â€œJay Jayâ€ Okocha and assistant coach of the Dream Team IV to Beijing 2008 Olympic Games, Simon Kalika, have warned Eagles not to take their South Africa 2010 World Cup opening match against Argentina with kid gloves, as doing that may work against their chances of qualifying from the group.

The Super Eagles will on 12 June take on the Lionel Messi-inspired side in their Group B opener and Okocha and Kalika believe that the Eagles should give their all if they must come out victorious in the encounter.

Both footballl guru would go a long way in determining how far they can go at the Mundial taking place on African soil for the first time.

Okocha argued that the Eagles of Nigeria have talented players, who can hold their own anywhere in the world but warned that they should be wary of the antics of the Argentines. It would be recalled that theÂ  Eagles at the USA â€™94 World Cup fell for a trick of the South Americans, when they were handed a free kick, which was quickly taken by Diego Maradona, who is now the chief coach of the team. He delivered the pass to Claudio Canigia, who sent the ball to the far right corner, with goalkeeper, Peter Rufai having no answer to the crucial goal.

According to Okocha, who captained Nigeria to the Korea/Japan 2002 World Cup: â€œNigeriaâ€™sÂ  match against Argentina wonâ€™t be an easy one because both teams have good players, but as a Nigerian, I would always want the Eagles to win. They have to go into the match as if it is the final match; any match involving both countries is not always easy and I donâ€™t see Saturdayâ€™s game being a differenceâ€.

Kalika in his reaction said he is not convinced that Nigeria can create any impact at the Mundial because coach Lars Lagerback has not gotten his first team, arguing that theÂ  Eagles are still struggling to find their footing with barely three days to the kick off of the Mundial.

According to the Dutch soccer tactician: â€œThe team are yet to fashion out a winning mentality, it is not about struggling on the pitch but doing what is right to win matches; Nigeria will not find it easy against Argentinaâ€.

Yakubu Aiyegbeni opened scores for the Eagles in the early minutes of the first half in the tension soaked match while Obinna Nsofor and Obafemi Martins drew the victory home in the second half.

Nsofor scored from the penalty spot in the 65th minute after a foul by the Koreans while Martins headed home in the 88th minute, barely five minutes after he replaced Osaze Odemwingie.

The Koreans scored their only goal after a defensive blunder by EldersonÂ  Echejile in the 68th minute when his wrong pass fell on the legs of Jong Tae Sae who found the Eagles net with a long range shot.

The match was stopped for about five minutes after some Nigerian fans with their massive support scared the opponents, while the Match Commissioner cautioned them.