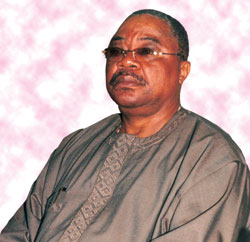 Some of the hoodlums have been arrested and one of them was beaten mercilessly by the police and the SSS His clothes were torn into shreds.

A member of the House was stripped naked, while most of the legislators fled.

Police and SSS operatives are still trying to coax them out of hiding.

Members of the House that were assisted to escape from the premises included Hon. Adejumo Makanju a.k.a. Agbarapo, who hid in his office, the press officer of the House and two other members who were helped out of the premises by policemen sent by the Oyo State Commissioner of Police to quell the crisis.

All the staff of the state House of Assembly have been evacuated by the police and SSS and they have been instructed not to come to work until further notice.

Meanwhile the Speaker has been taken away by the SSS.

Following the invasion by the thugs, activities at the state secretariat were paralysed as the workers were seen trooping out of their offices en masse to their homes.

The secretariat has been taken over by policemen in an armoured tank.

As at the time of filing this report, the Governor of Oyo State, Adebayo Alao-Akala, was yet to arrive the secretariat.

All the gates leading to the House of Assembly have been locked, while commercial vehicles have also deserted the secretariat.