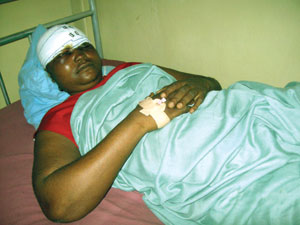 The National Drug Law Enforcement Agency, NDLEA has denied that its men who raided 20, Ogunnaike Street, Palmgrove, Lagos Nigeria, threw Mrs. Tayo Ogunshakin down from the second floor of a storey-building.

The agencyâ€™s Head of Public Affairs, Mitchel OfoyejuÂ  informed P.M News that it was Tayo Ogunshakin whose husband, Femi was being investigated for alleged possession of illegal drugs, that jumped down from the building in fear.

Tayo had told P. M NEWS in her hospital bed that the men initially suspected to be armed robbers had broken into their apartment. â€œWe just heard a big bang on our door at about 2 a. m. and we all woke up. We tried to prevent the intruders from entering our flat but they broke the door and swooped on us. They threw me down from the apartment, which is on the second floor of the building, and that was all I knew. I woke up and found myself in the hospital.â€

Femi, who is a serving police officer, had also claimed that the men did not introduce themselves as NDLEA operatives and he would have come out of his flat since he had nothing to hide.

But the NDLEAâ€™s spokesman said that the agents came to operate at night did not mean they should be taken as armed robbers.

â€œNarcotic raid operations globally are unique because of the nature of exhibits involved. It is so technical and specialised that the standard practice in NDLEA raid operations is anytime. This accounts for the reason why the NDLEA identity card serves as a search warrant. If the law requests that a search warrant must first be obtained before search is conducted it will be impracticable to recover drug exhibits. Be informed that there was a surveillance report on the suspect and it is professional for the operational team to work in line with the most suitable time as recommended by the surveillance officers,â€ he said.

Ofoyeju further said that the NDLEA men had to find their way into the room since Femi who was aware of their presence refused to open the door.

â€œLet me begin by saying that the NDLEA has deep respect for the fundamental rights of suspects. Before conducting search on a building, car, ship, aircraft, etc, there must be reasonable grounds suggesting that incriminating substances relating to drug investigation exists.

â€œOn the 4th of June 2010 at about 0200 hours, NDLEA operatives were on official assignment in search ofÂ  Femi aka Askari of 26, Ogunaike Street, Somolu in Palmgrove Area of Lagos. On knocking at his door, he refused to open. Even when the landlord, Mr. Temitayo Ogunaike personally called him that the people wereNDLEA officers he still refused to open.

â€œAt the time there was sound of movement in the room suggesting that the occupant was inside the room. However, for fear of missing the exhibit, the officers exercised their right of ingress provided by section 72 of the Criminal Procedure Act (CPA) to find their way into the room in the presence of the landlord but found nobody in the house.

â€œImmediately, the officers downstairs called the attention of the search team that the suspect jumped down and ran away. While they were about chasing him they heard a sound and on getting to the spot it was the wife who jumped down and sustained injuries. It was at that point the officers retreated as co-tenants were attending to her.â€

Ofoyeju said contrary to the allegation that N96,000 and a jackknife were stolen by the NDLEA men, â€œNothing was taken from his house. If he is confident that he had nothing to hide, why did he refuse to open his door? Why did he jump through the window? Why did his wife jump through the window? What was his role in the allegation? Why has he not reported at the NDLEA office since the incident occurred? These and other questions we want him to answer,â€ said Ofoyeju.

He said the landlord was not arrested but was only invited to the office to state what happened since he was a witness.

The landlord had earlier told P. M. News that he was led in handcuff to the Isolo Local Council Secretariat where the NDLEA has an office.

Ofoyeju said that the allegation that Femi was in possession of drugs still remained relevant and he would still be investigated.

â€œThere was an allegation on him and it will be properly investigated to ascertain his involvement. It is amazing that rather than open the door, the suspect preferred the unimaginable which is jumping through the window to evade arrest. The action raised some serious concern. Let me assure you that NDLEA has no business throwing somebody down. We are professionals in drugÂ control and we strictly adhere to the rules,â€ he stated.