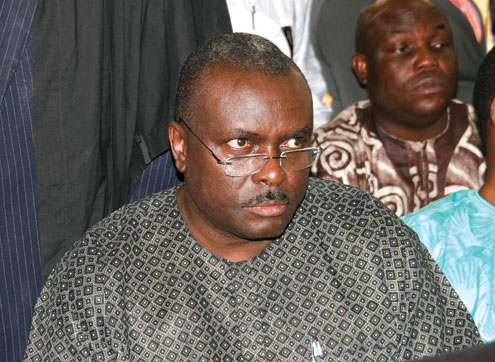 Former Delta State Governor, James Onanefe Ibori, who has been standing trial in Dubai, the United Arabs Emirate (UAE) yesterday lost his freedom as the authorities decided to revoke his bail.

Sources in Dubai informed P.M.NEWS that the UAE authorities took the action because they were afraid Ibori may jump bail.

His aides who were on trial in the United Kingdom have been found guilty of money laundering charges by a London court and have been jailed.

Ibori was expected to face the same trial with his convicted aides but he was reported to have fled the U.K., forcing the International Police (Interpol) to declare a manhunt for him.

The Metropolitan Police (Met police) declared Ibori wanted to press the UAE authorities for his extradition and trial in the U.K.

Back home in Nigeria, the Economic and Financial Crimes Commission, EFCC, also declared Ibroi wanted on the allegation of withdrawing N44 billion Delta State shares in Oceanic Bank and spending same to purchase shares in the United States oil servicing firm, Wilbros, while he was Delta State governor.

Early last month, his Oghara, Delta State home was stormed by the EFCC operatives. Shielded by militants he allegedly financed for his personal security, Ibori managed to escape to Dubai.

However, he was arrested by the Interpol on 12 May, 2010 in Dubai. The following day, he was arraigned before a Dubai court but was granted bail immediately.

Reports have it that Ibori has applied to the authorities in the country, UAE, for political asylum in order to escape prosecution in London or Nigeria where both the Met police and EFCC respectively have been pressing for his extradition.

Iboriâ€™s woes were compounded on Monday when a London court judge, Christopher Hardy, sentenced Iboriâ€™s sister, Mrs. Christiene Ibori-Ibie and Ms. Udoamaka Onuigbo to a jail term of five years imprisonment each. Only the third accused, Ms. Adebimpe Pogoson, was discharged and acquitted.

In their plea for leniency, defence lawyers were quoted to have said that the two convicts were mere pawns, indirectly admitting Iboriâ€™s guilt.

Ibori has been evading arrest and prosecution in London since 2007, but the conviction of the two women on Monday may lead to his extradition to London or Nigeria to face criminal charges of money laundering.