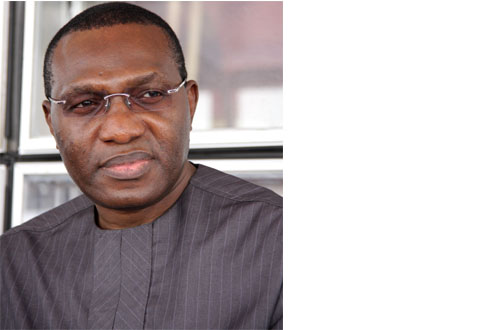 P.M.NEWS also learnt that Faith recently delivered a child in a European country.
It was gathered that Andy Uba travelled and abandoned his first wife, Gloria Obiageli and their four children to be with his mistress for the few weeks she spent in Europe before she was delivered of the baby.
The delivery of the new baby, it was gathered, has deepened the crisis between Andy and his first wife.

It was learnt that Andy is threatening to throw his wife out of his home, but has been incapacitated in doing so because the marriage he contracted with the woman was court wedding.

The Anambra State-born politician, it was learnt, is accusing his wife of being the brain behind the revelation and stories of his affairs with the single mother pastor in the media.
Sources close to the family of Andy told PMNEWS that the first marriage of the fomer governor of Anambra State has been on the brink of collapse, even as his first wife is busy running from pillar to post on how she will take her husband back from the pastor.

Though, it was learnt that the romance between the pastor and Andy has been on for some years, it became public knowledge after Andy was elected Governor of Anambra State in 2007. Reports indicated that Andy Uba had soon after he was sworn into office, stopped protocol officials from producing the portraits of Gloria, his first wife as his first lady.

This directive, it was gathered was influenced by the flashy light skinned pastor.

But the sack of Uba by the Supreme Court put paid to the scandal that would have emerged over the issue.

There are speculations that andy contracted a secret marriage with the Pastor who was using the prestigious Congress Hall of Transcorp Hilton Hotel, Abuja for her weekly Sunday services for some years before she moved to an Hilltop Mansion owned by Andy last year. The mansion, located in the posh Maitama area of Abuja now serves as the church and residence of the Pastor Faith.

Until the story of the hot romance began to grab headlines, Andy was a regular face at Pastor Faithâ€™s Miracle International Centre where he is fondly referred to as â€œDaddyâ€ by other worshippers.
Reports indicated that Uba has remained glued to the Pastor because she was helping him to keep some of the funds he amassed while he served as a presidential aide.