In Afterlife, Fela Celebrated On Broadway 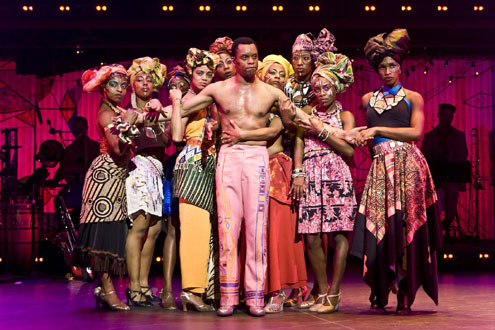 â€¢The Fela resurgence challenges newcomers to enter a world where African politics and spirituality intersect with themes of black liberation.

A performance of â€œFela!,â€ the acclaimed Broadway show on the life of Nigerian superstar Fela Anikulapo Kuti, makes for the kind of culture clash rarely seen on the Great White Way. And thatâ€™s just in the audience.

During intermission at one performance this spring, two women asked whether a Nigerian writer sitting nearby had seen the show before, because he seemed to know all the lyrics. The women, regular theatergoers whoâ€™d come for the seasonâ€™s hot ticket, had never heard of Fela. The plot â€” in which Fela and his many wives face a horrific army raid on their Lagos compound that leads to the death of Felaâ€™s beloved mother â€” was opaque to them. The Nigerian writer, meanwhile, had authenticity quibbles: He found the pidgin English dialogue was oversimplified and lead actor Sahr Ngaujahâ€™s Yoruba diction flawed.

Yet by showâ€™s end â€” whether moved by the lavish choreography of director Bill T. Jones, the spot-on playing of the house band featuring members of Afrobeat group Antibalas, or dramatic turns in the story line â€” all joined in the standing ovation.

Thirteen years after his AIDS-related death in 1997, Fela is enjoying a high tide of exposure. The musical, which garnered 11 nominations for this yearâ€™s Tony Awards and travels to London in the fall, is just one component.

Knitting Factory Records has bought rights to the Fela catalog and is reissuing 45 titles, in batches, with the original artwork. It is also releasing, this week, the cast album of the Broadway show. Separately, a Fela biopic is in the works from Focus Features, directed by Steve McQueen and starring Chiwetel Ejiofor.

Fela-themed conferences and exhibitions are proliferating. A London show last year presented work by Lemi Ghariokwu, who made much of Felaâ€™s album art in a distinctive style influenced by political cartooning. â€œLife After Death,â€ an exhibition exploring Felaâ€™s personality, opens this week at the Caribbean Cultural Center-African Diaspora Institute here.

Fela parties, Fela club nights, and Fela T-shirts are common in multiethnic bohemia from Brooklyn to Berlin. The culture has mushroomed from an underground Fela scene long nurtured by Antibalas, DJ Rich Medina, and others.

As it does each night on Broadway, the Fela resurgence challenges newcomers to enter a world where African politics and spirituality intersect with themes of black liberation, against the liquid grooves and hypnotic rhythms of Afrobeat. And it challenges insiders to share their icon with new listeners, viewers, and investors, some of whom might seem to embody the global capitalist forces that Fela songs like â€œI.T.T.â€ or â€œColonial Mentalityâ€ decried.

Would the real Fela â€” charismatic, cantankerous, acerbic â€” have approved this state of affairs? Ghariokwu, the artist who was close to him in the 1970s, says yes.

â€œHe would like it,â€ Ghariokwu says. â€œBecause Fela loved to be celebrated. He liked to be noticed. Heâ€™s a human being.â€

Ghariokwu is one of many Fela associates who have seen the musical at the Eugene Oâ€™Neill Theatre or its earlier off-Broadway incarnation. He has seen it 10 times. The first time, heâ€™d been warned off by some countrymen who were upset at the absence of Nigerians in the cast. But his own reaction was different.

Members of Felaâ€™s family, including musician sons Femi Kuti and Seun Kuti, earlier had signed off when the showâ€™s producer, New York businessman Stephen Hendel, purchased rights to the story.

Ngaujah, whose tour de force performance anchors the show (he alternates with Kevin Mambo), says he checked in with Felaâ€™s spirit when flying to New York to read for the role. â€œI said, â€˜Fela, whoever you want to portray you, I am behind you.â€™ I was so happy that he was reasserting his energy in our presence now.â€

In the Fela cultural economy, bringing the man back to life serves different purposes depending on whom one asks.

Producer Hendel, who imagined the play, says he discovered Fela about nine years ago. â€œI found it totally overwhelming,â€ he says. â€œThe music was so glorious and sensual and complicated, and the lyrics were so poetic and truthful.â€

For him, investing in Fela was part business proposition, part labor of love â€” and also a challenge to the conventional culture of Broadway. â€œI thought, here would be something unfamiliar but thrilling,â€ Hendel says. â€œLetâ€™s go to Broadway and see if we can knock down the walls of inward-looking America.â€

Measured by critical reception and award nominations, he has succeeded. For months the buzz around the show has been palpable. Celebrity sightings are common. And after Ahmir â€œ?uestloveâ€ Thompson of hip-hop band the Roots gave a glowing endorsement to the off-Broadway version, Jay-Z and Will Smith and Jada Pinkett Smith came on as investors.

But the bottom line is dragging, Hendel says. â€œItâ€™s much more difficult than I thought it was going to be,â€ he says. â€œWe have a long way before this thing recoups.â€

Hendel is an investor in Knitting Factory, which explains why the label licensed Felaâ€™s back catalog. The manager of the reissues, Brian Long, who turned on to Fela while working in college radio in Missouri, says the music is a breath of fresh air against the â€œlack of political urgency in popular music right now.â€

The label manages the Fela Kuti identity on Facebook and Twitter, mixing social exhortations, Fela quotes, and marketing messages. â€œPart of our game plan is creating a Fela Nation that we can communicate with,â€ Long says.

For a critical take on Felaâ€”Â  who, after all, was temperamental, promiscuous, usually high, sometimes violent â€” it helps to step out of what Nigerian writer Teju Cole calls the â€œFela-industrial complexâ€ and into activist circles where the man is celebrated, but scrutinized.

â€œYou can glorify to the extent that the personâ€™s humanity is lost,â€ says Shantrelle Lewis, curator of the â€œLife After Deathâ€ show, which takes on subjects like Felaâ€™s HIV status and relations with women. â€œWhen you look at his admiration of his mother â€” who was a leader of market women in Nigeria, an example of African womanism â€” thereâ€™s a huge contradiction with his treatment of his wives and women in general.â€

Nevertheless, she enjoyed the musical. â€œItâ€™s Broadway, you have to soften the edges to a certain degree,â€ she says. â€œItâ€™s not like outdoor community theater.â€

For Ngaujah, any narrative simplification is bound to recede once a new listener digs into the music and history.

â€œIf we presented a defanged Fela â€” which I donâ€™t think we are â€” and they enjoyed the piece and go research Fela, they are going to get bitten in the neck by a very powerful tooth,â€ Ngaujah says. â€œSo it will be a sneak attack from his perspective. Thereâ€™s just no way to get around this chap, heâ€™s so powerful. Ultimately the spirit of Fela Kuti cannot be stopped.â€