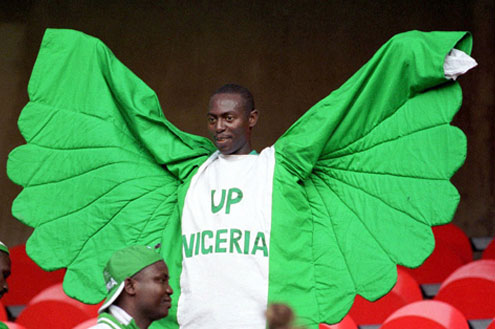 An Nigerian football supporter gestures prior to the World Cup match against Nigeria at Ellis Park stadium in Johannesburg. Â© AFP Pedro Ugarte

Despite dominating for long periods of the match, the two-time champions only had Gabriel Heinze’s sixth-minute goal to show for their superiority.

South Korea remain top of Group B after an earlier 2-0 victory over Greece, but Argentina’s impressive display will silence many doubters.

Join us at 1800 GMT for the build up to England’s first game against the United States which kicks off at 1830 GMT.

If you’re just coming in, you can read on to see how the match unfolded.

1556 GMT: “The Argentinian football fans celebrated the 1-0 victory over Nigeria with shouts, horns and trumpets,” my AFP colleague Liliana Samuel tells me.

“Hundreds watched the game at giant screens across Buenos Aires,” she said

90 + 2 mins: Maradona is nervously pacing the touchline, shouting instructions to his players.

90 mins: The assistant referee says there will be four minutes of stoppage time.

81 mins: The Nigerian goalkeeper has proved to be the man-of-the-match and rushes from his line to smouther another Argentinian attack

80 mins: Nigeria should have equalised but Kala Uche shoots over the bar from 10-yards.

70 mins: Peter Odemwingie rolls the ball into the path of Taye Taiwo on the edge of the penalty area, and the midfielder nearly hits the post with a vicious shot. Best chance of the half for Nigeria!

59 mins: The Barcelona starlet is in inspirational form for Argentina, and Messi earns a corner after a 25-yard diagonal run through the Nigerian defence.

55 mins: Lionel Messi is at the heart of every Argentinian attack, and Joseph Yobo has to stretch fully to intercept a 40-yard pass intended for Gonzalo Higuain, who was bearing down on the Nigerian goal.

49 mins: The crowd draws its breath as Messi falls to connect fully with Juan Veron’s low-cross and the balls shoots past the outside of the post.

46 mins: Nigeria kick-off and keep possession for the best part of two minutes. A lively start to the second half by Nigeria!

1459 GMT: Nigerian players huddle together for a team-talk before the start of the second half .

1455 GMT: “If (Barack) Obama, that small boy won the elections in America, what can deny Nigeria victory over Argentina? That goal is the only one they will get, the next two are ours,” Yusuf Adedayo Odueke — a CD sleeve designer and printer — tells my AFP colleague Susan Njanji at a roadside eatery in Lagos’ Iganmu suburb.

1451 GMT: “We’ve been waiting for the tournament to come to life and that is what we’ve just seen – Argentina are controlling the game. says BBC Sport’s pundit Alan Shearer.

“Though if I was playing for Nigeria, I’d want to attack Jonas Gutierrez because he isn’t a right-back,” he adds.

45 mins: HALF-TIME – Applause from the crowd as the referee blows for the end of the first-half

Newcastle winger Jonas Guiterrez is the first player to be booked for a crude challenge on Chinedu Obasi.

37 mins: Simple but sensational football from Argentina! An acrobatic save from Vincent Enyeama denies Messi, who cut in from the right and forced the goalie to push the goal-bound shot ball past the post.

34 mins: “I believe in prayers and I believe in players, but Argentina is a tough team. My prayer is that God grants Nigeria a favour in this match,” fashion designer and make up artist Tunde Afolabi — watching the match at an outdoor bar in the working-class Lagos suburb of Surulele — tells my AFP colleague Susan Njanji.

17 mins: Lionel Messi is in inspired form and screams with frustration as keeper Vincent Enyeama blocks his goal-bound shot.

11 mins: Maradona is getting very excited on the touchline, and every Argentine attack causes him to bounce up and down like a nervous puppy. You sense he wants to run onto the pitch and take part in the match!

Stunning goal! Argentina take a deserved lead after a lively start to the match.

6 mins: Its end-to-end stuff! The Nigerian keeper is forced into action by Lionel Messi, who collects a loose ball on the edge of the area and runs past two defenders but unleashing a curing shot that was creeping towards the top corner.

1400 GMT: AND WE’RE OFF – First real chance of the match falls in the first minute to Nigeria’s Chinedu Obasi, who should have hit the target after jinxing past Gutierrez on the edge of the area.

1359 GMT: The world’s best player Lionel Messi gets a huge roar from the noisy crowd when his face was beamed on the video screen as he warmed up with his Argentine teammates prior to kick-off, my AFP colleague Robert Smith tells me from pitchside.

The Nigerians have left veteran Nwankwo Kanu on the bench and also opted for three forwards, Yakubu Ayegbeni, Chidi Odiah and Victor Obinna.

Argentina have won both their matches with Nigeria at the World Cup – 2-1 at the 1994 and 2002 tournaments.

Nigeria’s last victory at the World Cup was back in 1998 when they beat Bulgaria 1-0 and since then the Super Eagles have lost four games and drawn one.

1355 GMT: WELCOME TO ELLIS PARK HERE IN JOHANNESBURG for the second game of day two at the World Cup 2010 between Argentina and Nigeria in Group B.

Diego Maradona’s Argentina must start the game as favourites with their star-studded team featuring Barcelona’s Lionel Messi and Manchester City’s Carlos Tevez while the Super Eagles will be looking to their captain Joseph Yobo to keep the South Americans’ attackers in check.

Nigeria will hope Yakubu can come up with a goal at the other end.