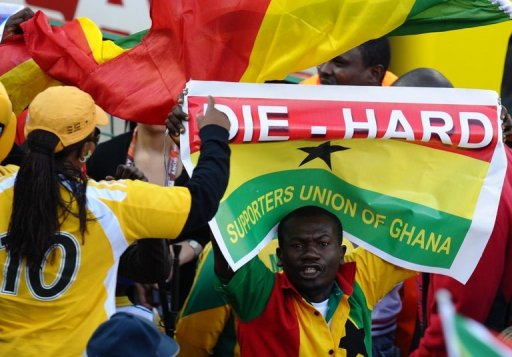 A Ghana supporter cheers prior to the start of the Group D first round World Cup match between Serbia and Ghana at Loftus Versfeld stadium in Tshwane/Pretoria. Â© AFP Hoang Dinh Nam

PRETORIA (AFP) – WOW! WHAT A WIN FOR GHANA over Serbia in Pretoria. It’s the first win for an African side at the first ever World Cup finals to be held on African soil.

Ghana have now stolen a march on their Group D rivals with that win, which was thoroughly deserved after they created the lion’s share of the chances against an overly-cautious Serbs.

Milovan Rajevac’s Black Stars showed far more ambition than their Serbian counterparts from the start and should have taken the lead earlier than the 84th minute.

Two moments of madness lost it for Serbia – Aleksandar Lukovic’s rash lunge to pick up a second yellow card and Kuzmanovic’s rush of blood to the head to give away the spot-kick ten minutes later.

The group’s other two teams Germany and Australia now take each other on in Durban. Kick-off at 1830 GMT but join us at 1800 GMT for live build-up!

If you’ve just joined us, read on for our running live commentary of Ghana’s sensational win over Serbia.

1556 GMT: “They have won by sticking to their tactics – they’ve not been brilliant but I’m very happy they’ve won,” says fromer France defender and ITV Sport pundit Marcel Desailly.

And that’s it! What a win for the Black Stars and the first win for an African side at the first ever World Cup finals to be held on African soil.

90+1 mins: What a chance for Ghana to put this to bed – Asamoah Gyan is in on goal, opens his body up and curls a delicious shot around the ‘keeper. But it bounces back agonisingly off the post.

87 mins: YELLOW CARD! Prince Tagoe has a chance to win it for Ghana – he’s in on goal but drags his shot just wide. But he was offside and is booked for ignoring the call.

GOAL! Serbia 0 Ghana 1 Asamoah Gyan smashes his penalty straight down the middle and the net bulges – Serbia’s ‘keeper had no chance of saving that. Do Serbia have time to fight back?

Serbia’s Zdravko Kuzmanovic handles a long ball crossed into the box. Asamoah Gyan steps up to take it…

80 mins: Ghana ‘keeper Richard Kingson makes a good save from Milos Krasic from 12 yards, tipping his powerful shot over the bar.

Nemanja Vidic then sends his header from the resulting corner flying over the crossbar. What a chance! He just couldn’t keep it down.

Serbia have been revitalised since going down to ten men.

67 mins: Another change made by Serbia coach Radmoir Antic, who brings on forward Danko Lazovic to replace the tiring Nikola Zigic up front.

59 mins: Huge leap from Ghana’s Asamoah Gyan at the near post from a throw-in – and he hits the outside of the post with his header!

The goalkeeper Vladimir Stojkovic looked like he just about had that covered though.

57 mins: Great chance squandered at the back post by Serbia’s Nikola Zigic, the big man totally miscuing from five yards out. End-to-end stuff.

53 mins: Great cross from the right by Prince Tagoe and Ghana midfielder Andre Ayew has a gilt-edged chance at the back post but sends his header wide. Best chance of the game so far.

48 mins: Serbia’s Milan Jovanovic does well to drive his way into the box down the left channel but he loses his composure and slices a left-foot shot high and wide.

1501 GMT: And the two teams are back out on the pitch – the second half has begun.

Meanwhile, in the stands, a colourful conga has started among the Ghanaian fans – great stuff.

1455 GMT: “Serbia are very cautious – it’s as if they’re thinking: ‘Were’e going to sit, we’re going to wait and we’ll see if we can pinch something on the break.’ A little bit over-cautious for me,” ITV Sport pundit and former Republic of Ireland international Andy Townsend says.

45 mins: Just one added minute to play. Ghana have been the better team in this first half but still have nothing to show for it.

36 mins: Some more from my AFP colleague David Adadevoh in Ghana’s capital Accra:

“Sitting in a roadside bar, sipping Pepsi and listening to Bob Marley’s hit “Small Axe” Daniel Nonor, an Accra businessman, says: ‘If the Serbians are being touted as the big tree, then we are the small axe, we will chop them down.

‘We will defeat the Serbians like David defeated Goliath in the Bible,’ says Owusu Appiah, carrying a yellow vuvuzela horn and dressed in a flowing robe in Ghana’s national colours – red, green and gold robe – as he walks down the street in Accra’s Abeka Lapaz working-class suburb.

‘The Serbians have the big names, but we will beat them with a Ghanaian unique style of play which they never tasted in their life,’ says Joe Baidoo, a carpenter, who has been drinking beer since early on Sunday waiting to watch the game.”

31 mins: Serbia’s Marko Pantelic cuts inside from the left and unleashes a low shot but it flies harmlessly into the side-netting of Richard Kingson’s goal.

26 mins:YELLOW CARD! Birminghan City’s new striker Nikola Zigic (6ft 9in.) gets caught by a lunging challenge from 6ft 5in. Isaac Vorsah, who is promptly cautioned. Clash of the titans there.

Asamoah Gyan back on the pitch but limping.

20 mins: Wow, that was close! Asamoah Gyan stretches out his neck in the box but can’t quite make contact a deliciously curling ball in from Kevin-Prince Boateng on the left.

John Mensah gets a head to the free-kick but can only send it wide.

14 mins: Good break in from the left by striker Kwadwo Asamoah, who drills the ball in dangerously but it’s cleared behind by towering striker Nikola Zigic. That could have gone anywhere.

8 mins: Ghana have started the stronger here at the ancient Loftus Versfeld Stadium, built in 1906 and better-known for hosting South Africa’s rugby internationals.

4 mins: My AFP colleague David Adadevoh in downtown Accra is soaking up the atmosphere there.

“It’s electrifying – fans seem happy with the line-up and very optimistic that Ghana will carry the day because of the strength and youthfulness of the team.

“Everybody is glued to TV sets, Accra streets are empty and churches have closed early, which is unusual.”

Looks like Inter Milan’s Sulley Muntari hasn’t totally recovered from his injury and is on the bench for Ghana. No Stephen Appiah either.

WELCOME TO THE LOFTUS VERSFELD STADIUM in Pretoria as Serbia take on Ghana in the first Group D match of the World Cup.

It promises to be a closely-fought encounter as both sides know they cannot afford to lose having been pitted in one of the toughest groups which also includes Germany and Australia.

Ghana are making their second consecutive World Cup appearance — they reached the last 16 in Germany in 2006 — and the African side will be hoping for considerable support from the locals in South Africa.

The west African side will be without Chelsea midfield enforcer Michael Essien – who misses the entire tournament with knee ligament damage – and their preparations could be further dented if Inter Milan’s Sulley Muntari fails a late fitness test.

Serbia will fancy their chances after an impressive showing in the qualifying stages when they topped a group that featured France, Austria and Romania.

Inter Milan’s Dejan Stankovic provides the creative spark to the side while Birmingham striker Nikola Zigic – who is the tallest player in the tournament – will present the African side with plenty of problems at set-pieces.