The fear of Super Eaglesâ€™ goalkeeper, Vincent Enyeama is the beginning of wisdom for Greece in the ongoing 2010 FIFA World Cup in South Africa.

P.M.Sports can exclusively reportÂ  that the Greece national team have been studying the video clips of Nigeriaâ€™s match against Argentina where Enyeama, the Hapoel Tel Aviv of Israel goalie put up a superlative performance to deny Argentinaâ€™s world class stars from scoring more than one goal in that group match. 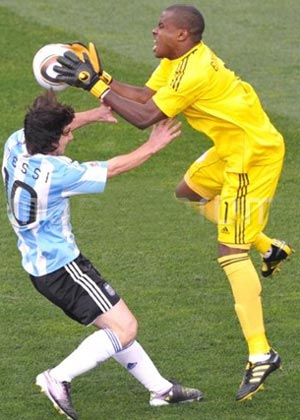 Coach of Greece, Otto Rehhagel, has mandated his strikers to watch out for Enyeama when they meet Nigeria in the second group match on Thursday. It was discovered that nearly all the players of the Greek teamÂ  have the DVD of the match, all in an attempt to study the way Enyeama stopped the Argentines in the first game.

When P.M.Sports checked at the teamâ€™s hotel, the name on the lips of every member of Greece side is ‘Enyeama’ , though they could not pronounce it very well.

Greece coach, who spoke through a FIFA interpreter, told P.M.Sports that â€œthough the match against Nigeria is two days away, we are not taking it lightly with your Super Eagles at all. There is no doubt that Enyeama is a great goalkeeper, I have told my players that we just have to work ahead of him, otherwise it would be very tough to score through him.â€

Meanwhile, Coach of the Nigerian team, Lars Lagerback, has expressed his disappointment over his teamâ€™s porous defence, saying they would have to brace upÂ  if the Eagles must scale the hurdles of Greece and South Korea.

â€œIâ€™m really disturbed. Though my players played well against Argentina, a lot still has to be done with the defence. We are to close up our rear before our next game. The players are not showing seriousness in the defence. If not for luck, it could have been so bad against the Argentines,â€ the Swede lamented.

The Eagles are in serious training ahead of the game against Greece on Thursday. The coaches are drilling them to increase their speed to counter the pacy Greek team.