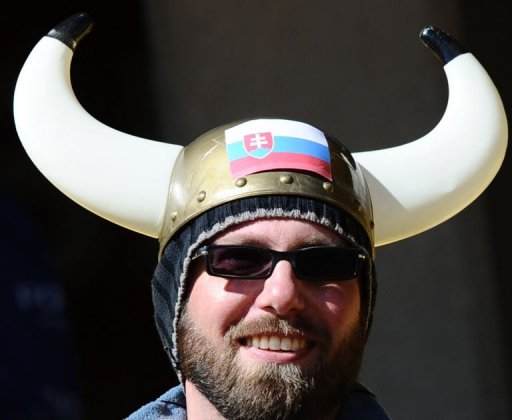 RUSTENBURG, South Africa (AFP) – ITS ALL TO PLAY FOR IN GROUP F after a last-gasp goal by Winston Reid earned New Zealand a well deserved 1-1 draw with Slovakia.

The All Whites looked destined for defeat after Robert Vittek’s glancing header had given Slovakia the lead, but with virtually the last touch of the match, Reid popped up at the back post to head Shane Smeltz’s cross in off the post.

If you’re just joining us, read on to get a detailed account of how the game in Rustenberg unfolded.

90 + 3 mins: FULL TIME! Slovakia and New Zealand earn their first ever points at the World Cup as the referee blows for the end of the match!

The Slovakian players look dejected but nothing is going to stop the New Zealand celebrations.

90 + 3 mins: YELLOW CARD! Winston Reid is booked for removing his shirt during the goal celebrations! That was a bit harsh by the ref!

New Zealand send a desperate cross to the far post where Winston Reid climbs over the defender to equalise!

90 mins: There will be three minutes of added time.

88 mins: That was close! New Zealand’s Tony Lockhead takes off on a swashbuckling run down the right before sending a looping cross for Shane Smeltz who sends his downward header just wide of the post.

84 mins: It is really comfortable for Slovakia as their keeper hasn’t been called into action in this half.

77 mins: New Zealand are on the ropes as the Slovakian midfield have really taken a grip of this match.

A nice passing move frees Stanislav Sestak but his close-range shotÂ  is blocked by Tony Lockhead.

69 mins: Amazing! Slovakia launch a quick counter-attack and nearly score a second as Marek Hamsik passes the ball to the fast-charging Stanislav Sestak who knocks it down into the path of Robert Vittek…the forward looks likely to score but Winston Reid kicks the ball out for a corner. Great move and even better defending!

64 mins: Slovakia should have doubled their lead after an unexpected moment of skill from the rugged Stanislav Sestak .

The striker shows an excellent first touch as he controls a high ball and then occupies two defenders before setting up Marek Hamsik who blasts the ball over the bar.

That was a really poor finish and Hamsik should have forced the keeper into making a save.

58 mins: Danger for New Zealand as a blistering run from Vladimir Weiss takes him past two defenders, but the keeper is out like a flash to smother the ball and snuff out the threat

56 mins: The goal has been a real body blow for New Zealand, who have retreated into their own half and are willing to let Slovakia keep possession.

55 mins: YELLOW CARD! Zdenko Strba is finally booked for a crude challenge on Simon Elliott. Those two clearly do not get along!

52 mins: The evergreen Simon Elliott, 36, collapses after a late challenge from Zdenko Strba.

Slovakia’s are rewarded for their energic start to the second half, as Stanislav Sestak races down the right wing before whipping in an inviting cross which Robert Vittek heads past the keeper.

46 mins: Slovakia make a promising start to the half and almost immediately earn a corner.

“Slovakia have got to be better in the final third of the pitch,” he adds.

“They’ve got away with it so far but Slovakia can only got better in the second half,” he adds.

1220 GMT: New Zealand might lack polish but they have really held their own against Slovakia who took a long time to assert themselves on the match.

There was a lot hype about Marek Hamsik, but the Napoli star has really disappointed apart from that one stinging shot.

45 + 1 min: HALF TIME. The referee blows his whistle and the players trudge off the pitch.

45 mins: The fourth official signals there will be a minute of added time.

43 mins: Slovakia nearly take the lead as the ball is rolled into the path of Marik Hamsik who forces the goalkeeper to palm the ball over the bar.Â  Great play by Hamsik!

39 mins: New Zealand keeper Mark Paston is having a shocking game! He bizarrely leaves a cross and breathes a sigh of relief as his defender hooks it clear.

34 mins: Kiwi keeper Mark Paston loses his footing as he chases a loose ball but Robert Vittek cannot capitalise and his shot is blocked by Simon Elliott. New Zealand were let off the hook!

28 minsÂ  Vladimir Weiss charges to the edge of the penalty area before teeing up Stanislav Sestak whose shot is a goes a whisker past the post! Weiss is at the heart of Slovakia’s best attacking efforts!

22 mins: Best chance of the match falls to Slovakia. The tricky Vladimir Weiss frees Marik Hamsik on the edge of the area, but the Napoli midfielder shoots well wide. He should have done better with that chance!

18 mins: The first Mexican wave! Oh dear, that is a bad sign!

15 mins: Slovakia’s Vladimir Weiss shows an impressive turn of speed as he races to the byline but scuffs his cross.

New Zealand are showing plenty of spirit and really do look like the better side! How many people would have said before the start of the match .

12 mins: Promising start by New Zealand who have not allowed Slovakia to find any fluency in midfield.

10 mins: New Zealand earn a free-kick on the half-way line and Simon Elliott floats a dangerous ball for targetman Rory Fallon but Liverpool defender Martin Skrtel sends the ball out for a corner.

8 mins: First chance of the match for Slovakia as Marek Hamsik rolls the ball into the path of Robert Vittek, but the striker cannot quite reach it in time!

5 mins: New Zealand, wearing their traditional white strip while their oppponents are in blueÂ  — earn a free kick on the halfway line, and they go close as Chris Killen rises above the Slovakian defence — but can only send a weak header straight at the ‘keeper! He should have done better with that chance!

2 mins: New Zealand’s Chris Killen has the first shot of the match but it sails harmlessly over the bar.

1130 GMT: THE WHISTLE IS BLOWN by South African referee Jerome Damo and New Zealand get us under way.

New Zealand coach Ricki Herbert has confirmed the side he had announced on the eve of the match with two defenders, Ivan Vicelich and Tony Lochhead operating in midfield.

1127 GMT: Slovakia coach Vladimir Weiss — the youngest coach at the World Cup — has included his son in the starting line-up.

1126 GMT: My colleague Angus MacKinnon tells me winter has come to Rustenburg.

“An overnight storm has sent temperatures plummetting and all the African volunteers are muffled up to the max at the Royal Bafokeng Stadium,” he says.

“Shouldn’t be a problem for New Zealand or ice-hockey crazy Slovakia though!”

1117 GMT: New Zealand are more famous for their all-conquering rugby side, but there is rising interest in the World Cup.

New Zealand captain Ryan Nelsen told a journalist why the All Whites won’t be emulating their famous rugby counterparts the All Blacks at the start of the match.

“Skinny white guys doing the haka? That would be very intimidating,” Nelsen joked.

New Zealand had a comfortable route into the World Cup, defeating Fiji, Vanuatu, and New Caledonia before edging past Bahrain in a play-off for the place in South Africa.

John Adshead — who coached New Zealand in their only other World Cup finals appearance in 1982 — has warned the All White fans against adopting unrealistic expectations.

TWO RANK OUTSIDERS TAKE THE CENTRE STAGE in the first of today’s three games as New Zealand lock horns with Slovakia at the Royal Bafokeng Stadium in Rustenburg.

The two sides know that victory will allow them to steal a march on their Group F rivals after four-time champions Italy could only muster a 1-1 draw with Paraguay last night.

New Zealand are taking part in only their second World Cup and many of their supporters are hoping they can put in a better showing than 1982 when they lost all three games and conceeded 12 goals.

Slovakia are making their debut as an independent nation following the break-up of Czechoslovakia in 1993.

Kick-off is fast approaching at 1130 GMT so stay with us for all the action as it happens.