The Most Sought-After Nollywood Actresses 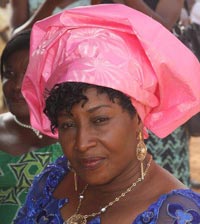 These are actresses that have stood the test of time in the Nigerian movie industry, known as Nollywood. Their brilliance in interpreting rolesÂ  has distinguished them from the crop of other actresses who are neither here nor there. Having said that, these divas have not only become the toast of many viewers, they are the most sought-after by movie producers, directors and

marketers. This week, NollywoodReel takes a look at these current worthy ambassadors of Nollywood

PATIENCE OZOKWOR: Popularly referred to as Mama G, Patience Ozokwor is one actress that can be described as a bundle of talents. No doubt, her dexterity and flexibility are two major factors that have made her who she is â€”a fantastic actress. Even though she is not a young lady, the widow who lost her husband while still in the Nigeria Police, has several times convinced buffs with the kind of roles she had played. A lot of viewers are of the opinion that she is best at interpreting a wicked womanâ€™s roles, but the truth is she has acted a couple of good womanâ€™s roles too, as well as that of a young lady. Little wonder she is the dream actress of every director.

INI EDO: She used to be labelled one of the bad girls in the industry, but recently she seems to have mellowed, giving the impression that she is now mature. Some years back, Ini, as she is fondly called, was banned by the then Ejike Asiegbu-led Actors Guild of Nigeria (AGN) for acts of insubordination, but it was later lifted following series of pleas from her and other practitioners. Being one of the top actresses that were enmeshed in one controversy or the other, many could not imagine that the romance between this screen goddess and her Edo State born lover, Philip Ehiagwina, could lead to the altar. The wedding, which was held in Nigeria and London was the talk of town, as the couple proved cynics wrong. As an actress, beautiful Ini is quite talented and she is for obvious reasons, one of the most sought-after.

OGE OKOYE: This slim, fair complexioned lady is an emotional person and was born into a very caring family where she got all the attention she needed while growing up. Despite her fatherâ€™s objection to acting, Oge, against all odds, believed in herself and worked hard towards making her dream come true. And today, she is not regretting. Since her foray into the make-believe industry, her passion for the job has continued to improve. She has so far acted in a lot of flicks and she is one of the most sought-after actresses.

Rita Dominic is one of the most fashion-conscious actresses in Nigeria and this is not unconnected to why photo journalists, television presenters and corporate bodies always focus on her at events. She has a good dress sense; knows the right colour combinations and of course, the right choice of dress for each outing, among others. Two years ago, she was voted the best dressed actress at a poll conducted via a blog on the internet.Â  Apart from her talents, Ritaâ€™s beauty andÂ  silky skin have made her the favourite actress of many. Therefore, her inclusion in the list of ambassadors picked from the movie industry by telecommunication giant Glo, did not come as a surprise to people. This multiple award-winning actress is one of the most sought-after and she has lost count of the number of movies in which she featured.

Funke Akindele: Although she started from the popular UNICEF sponsored educative serial, I Need To Know, Funke may not have got the needed breakthrough in the mainstream of Nollywood, she is currently the most sought-after in the Yoruba sector of Nollywood. Born on 24 August 1976, Jennifa, as she is fondly called, is a Law graduate of the Lagos State University. After some years of hustle and bustle in the movie industry, God eventually crowned her efforts with the movie, Jennifa. She is also a Glo ambassador, the only Yoruba actress to be included in the list.

Tonto Dike:Â  Tonto Dike is a graduate of Petrochemical Engineering from Rivers State University of Science and Technology. She had always been interested in acting since her university days. The 24-year-old fair complexioned lady lost her mother while she was barely three years old. She is from Ikwere Local Government area of Rivers State. Rita Dominic inspired her into acting and she started acting in 2005 after she emerged as the first runner up of the Next Movie Star reality show. The lady, who is yet to be married, is looking forward to going into oil business in the future. Growing up for Tonto Dike was not really a challenge because her dad was very comfortable, although he had to re-marry some years after her motherâ€™s death. Her first movie was produced by her best friend.

Uche Jumbo: She paid her way through school with an acting scholarship. She was born in Enugu and raised in Aba, she is the third of nine children and she hails from Abia State. She used to be a member of United Church of Christ where she was asked to join the drama group of the church by her mother, and her reason for doing this was to keep her away from the streets because she was on the path of becoming a street girl. She started out on screen when she featured in a soap opera titled Images which later became a home video. This unassuming lady did a Post-Graduate Computer Science programme in the Federal University of Technology, Minna, Niger State and also has bagged a degree in Statistics from University of Calabar.

She was born in 3 May 1979 and she started acting when she was eight years old. She started acting in a popular television soap opera titled Ripples and also featured in several commercials for beverages and detergents. This mother of one got her first major movie script at age 19 with the movie titled Most Wanted and later did other movies like Ijele, Mark of The Beast, Last Party, and in 2002 she featured in Sharon Stone, another block-buster flick. After this award-winning flick, her reputation soared beyond Nigeria and Africa.
The young beautiful actress is one of the highest paid actresses and most desired by viewers. She is also into clothing business which she named ST Genevieve and a particular percentage of the outfitâ€™s income goes into orphanage homes.

Monalisa Chinda: Monalisa Chinda was formerly married to Dejo Richards, but they are now divorced. She started acting in 1992 and came on screen when she featured in a soap opera., Her first home video Pregnant Virgin was released in 1996. A mother of one, Monalisa started acting from the University of Port Harcourt where she was studying Theatre Arts. Her parents were initially against her acting and her up bringing was strict, probably because she is the first child of six children.

Mercy Johnson: Arguably the hottest actress of the moment, the list of most sought-after Nollywood divas would not be complete without the name of this Kogi State born actress.
Mercyâ€™s steady rise to stardom is a typical example of a grass to grace story, as her childhood was full of uphill challenges. In her early 20s, Mercy has already lost count of her movies, and more scripts are still coming her way.