Kanu: I Want To Play

Captain of Nigeriaâ€™s Super Eagles, Nwankwo Kanu is looking forward to playing his first match of the 2010 FIFA World Cup when Nigeria take on Greece in their second group match in Bloemfontein, South Africa tomorrow.

The Portsmouth of England star told P.M.Sports today that he is praying to God that he would be selected for the crucial game which the Eagles need to be in contention for a place in the second round of the Mundial. 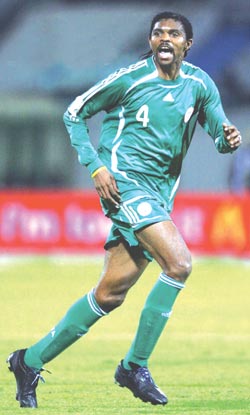 Speaking before the team departed their camp in Richard Bay to the venue of tomorrowâ€™s encounter, Bloemfontein, Kanu said: “Iâ€™m tired of sitting on the bench. One thing Iâ€™m looking forward to in my life now is to play against Greece tomorrow, and Iâ€™m waiting on the coach, Lars Lagerback, to give me the opportunity.

â€œI want to play. This will be my last World Cup for the country and we are playing a match that we must win to have a bright chance of moving on in the World Cup. I cannot continue to warm the bench while others are playing. Iâ€™m sure I was selected to be part of the team for this World Cup because the coaches knew I have something to offer the country. I want to say that as soon as I get the opportunity, Iâ€™ll prove that Kanu is still Kanu.â€

Meanwhile, the spirit in Eaglesâ€™ camp is high ahead of the all-important match against the Greeks. The players are already charged with the determination to win the game. During a short prayer session after their training at the mini stadium in Richard Bay yesterday, assistant captain, Joseph Yobo, who led other players, were all in one accord, saying: “We can do it, let’s go and do it. If we win we are still in the competition.”

They demonstrated their resolve to fight it to the finish with the Greeks with the way they responded in the training.

Wolfsburg of Germanyâ€™s Obafemi Martins and Osaze Odemwingie of Lokomotiv Moscow of Russia were spectacular at the training, especially during the shooting exercise. The coaches and other officials, who watched the training, admitted that if the players could play with the determination they showed in the training, they are more than ready to face the Greek test tomorrow.