Nigeria Threatens US Oil Firm With Sanctions Over Spills 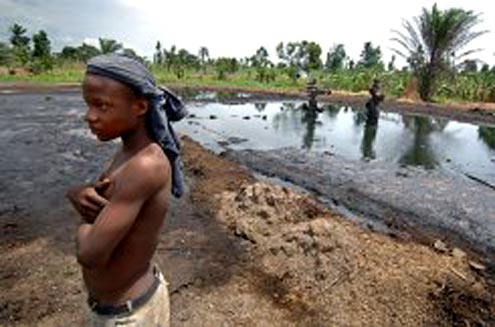 The Nigerian government on Tuesday threatened Exxonmobil with sanctions if it fails to manage spills properly, in talks with officials of the US oil giant.

Idris Musa, head of Nigeriaâ€™s oil spill response agency, said the meeting was to “call the attention of ExxonMobil, for the last time, to the need to put a stop to the incessant oil spills that we have been having within its operation area”.

“From December to date, we have had three that we can say are of concern… Some of the spills are not large but the frequency is becoming a source of concern and worry to the agency,” Musa added.

“It is the clean-up process that we are not really satisfied with and that is why we are drawing their attention to the fact that subsequently if that kind of situation occurs, they will not escape sanctions.”

Musa, whose agency is affiliated with the environment ministry, did not specify what the sanctions could be.

“ExxonMobil needs to show more caution in terms of the management of oil spills,” Environment Minister John Odey told reporters after the meeting.

Musa told reporters after the meeting that his agency had since 2006 recorded about 2,405 oil spills involving all the major international oil companies operating in Nigeria.

The meeting was convened against the backdrop of the spill of about 300 barrels of crude reported in one of the firmâ€™s offshore platforms in southeast Akwa Ibom State on May 1, the minister said.

“We are concerned about the operation of ExxonMobil because once it is offshore, any spillage will, of course, affect the shorelines and it could go far beyond the area of operation,” said the minister.

Although ExxonMobil has started the clean-up, the government said it was not satisfied with the exercise.

ExxonMobil Safety and Environment Manager, John Etuk, admitted that although there was a spill in May, it was promptly reported to the relevant agencies.

Etuk disputed the official charge that the oil group did not carry out the clean up to specification.

“We cleaned up the environment to the agreed portion but along the line two agencies out of the four wanted it to go up the Calabar River,” Etuk said.

ExxonMobil takes very seriously the issue of environment in its operation and would also live up to its responsibilities on the issue, he said.

Militant groups in the oil-rich Niger Delta accuse the international oil majors of causing environmental degradation and destruction of the local communitiesâ€™ ecosystem.