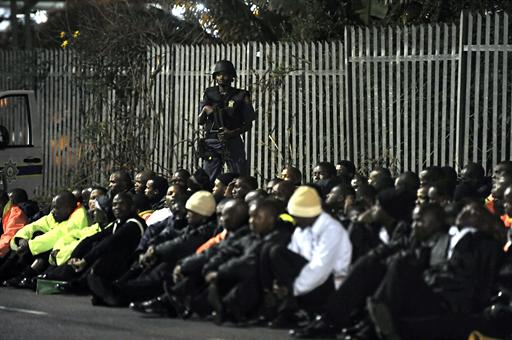 A special police officer stands over detained workers in front of the Moses Mabhida World Cup stadium in Durban on June 14, 2010. The protest broke out after stadium workers said they had not been properly paid. Police used stun grenades and tear gas to break up the peaceful demonstration that occurred after Germany beat Australia 4-0 in their opening World Cup match. AFP PHOTO / Aris Messinis

Thousands march to protest World Cup spendingThousands of South Africans staged a march Wednesday to protest lavish spending on the tournament, the sacking of security staff, and sundry other complaints against Fifa.

There is widespread anger among South Africans towards FIFA whose demands for a smooth-running tournament has seen the government pour 33 billion rands (4.3 billion dollars, 3.5 billion euros) into World Cup preparations. “Get out FIFA mafia!” chanted the crowds in a Durban park. Some 40 percent of the population in South Africa live on less than two dollars a day.