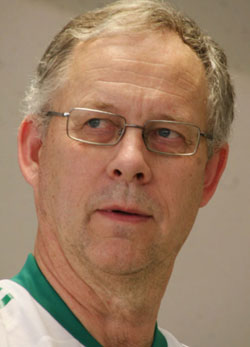 Nigerian defender Danny Shittu believes Nigeria will bounce back from their disappointing loss to Greece.

Lars Lagerbackâ€™s troops lost 2-1 to the Greeks in a chilly Bloemfontein on Thursday.

The Super Eagles opened the scoring through Kalu Ucheâ€™s free-kick in the 16th minute, but Sani Kaita was shown his marching orders in the 33rd minute and Greece made their numerical advantage count.

Goals from Dimitrios Salpingidis and Vasilis Torosidis saw them take all three points in Bloemfontein.

â€œItâ€™s hard to play a team with 10 men especially in the World Cup,â€ said Shittu.

â€œThings like that happen in games and you have got to stick together and work hard and we really thought we were going to do it.

â€œYou know we finished the game 2-1 and we are very disappointed,â€ added the Bolton defender.

â€œItâ€™s a game that we wanted to win and when we got the goal we thought that we could score more goals. You know Nigeriaâ€™s style of play is that we donâ€™t go full out attack, we play sometimes and I think that is what we tried to do today.â€

Meanwhile, the camp of the Super Eagles may be in disarray with players wearing long looks as they filed out of the dressing room to the mixed zone area, where they were supposed to offer flash interviews to the press.

First to come out was Sani Keita, the architect of Nigeriaâ€™s defeat. He snubbed every one and Nigeria Football Federation (NFF) member, Taiwo Ogunjobi, had to persuade him to go back and take another walk down the aisle to speak to the press.

When he did, it was to the foreign press he opened up to. One by one, the other Super Eagles players filed out. First was the unfielded Obafemi Martins who mumbled at the press, asking to be left alone, followed by Taye Taiwo and others.