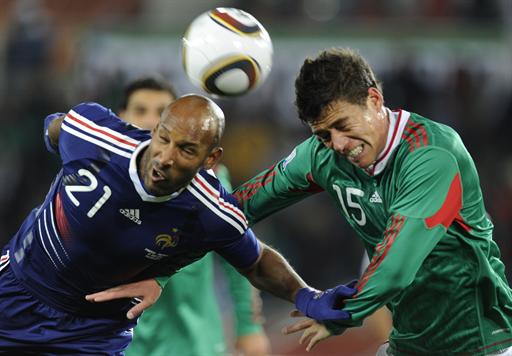 Mexico stunned France 2-0 in a World Cup Group A match on Thursday to leave the 1998 winners and 2006 finalists teetering on the brink of elimination.

Substitute Javier Hernandez, who will play for Manchester United next season, put Mexico ahead in the 64th minute after rounding French ‘keeper Hugo Lloris and coolly slotting the ball into the net soon after entering the game. Mexico increased their advantage after an increasingly ragged France conceded a penalty when Eric Abidal scythed down Pablo Barrera, which 37-year-old Mexican striker Cuauhtemoc Blanco converted to the joy of Mexico’s fans.

The result means Uruguay and Mexico only need to draw in their final Group A game on Tuesday to qualify for the next round and send France, who play host nation South Africa the same day, crashing out.