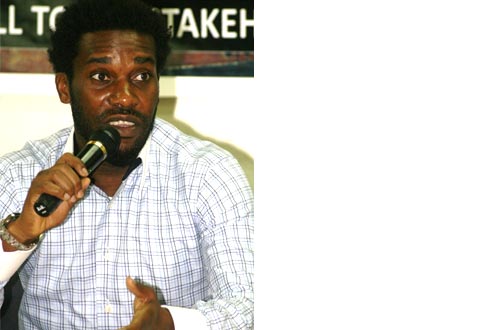 As Nigeria continues her miserable run at South Africa 2010 World Cup, immediate past skipper of the Super Eagles, Austin â€˜Jay Jayâ€™ Okocha, has given the Coach Lars Lagerback squad a hard knock, saying the bunch are a disgrace to the country.

Okocha, one of the African legends invited to South Africa 2010 by the LOC, said he watched in utmost disbelief yesterday when the Eagles gave away a winnable second Group B match to Greece at the Bloemfontein stadium.

Greece did not just defeat Nigeria 2-1 in the pulsating encounter, the Europeans brightened their chances of making it to the next round, making history by scoring their first ever goal and victory in the FIFA World Cup.

The outcome of the match, in Okochaâ€™s opinion, speaks volumes about the rot in Nigerian football and he castigated the Nigeria Football Federation, NFF for bringing the Swede Coach, Lagerback and the current squad to embarrass Nigeria in the first World Cup to be held in Africa.

â€œAll of us back home in Nigeria knew that this group of players would not get anywhere from the start. Their preparations were nothing to write home about while the Swede manager was brought into the fold too late. The performance of the Eagles in South Africa is disgraceful and not acceptable. I feel very sad that the majority of Nigerians are here watching the Eagles in this terrible condition,â€ Okocha said.

The former PSG and Bolton Wanderers midfielder, said the red card, which sent Sani Kaita out of the match, further confirmed the poor level of football administration in Nigeria.

â€œI donâ€™t believe in permutations. Those who think the Eagles are still in contention must be dreaming because Kaita and his team-mates blew their opportunity. We were leading by a good goal, which Kalu Uche luckily scored.

â€œBut, Kaitaâ€™s attack on the Greek player was unnecessary. He was not threatened, so why kick the player? Itâ€™s really bad that Nigeria did not live up to her reputation in international football.â€

The Eaglesâ€™ tactical approach to the game also came under Dwight Yorkeâ€™s hammer, blaming Lagerbackâ€™s team for being too defensive throughout the match.

Yorke, a former Manchester United striker said: â€œIâ€™m surprised that the Nigerian players were taking the ball back to themselves instead of putting pressure on Greece. I saw some great moves that the Eagles started from the midfield several times, but they sent back the ball each time they got close to the third line near Greeceâ€™s box. Their style was too defensive, and no team can win a top level match with that strategy.â€

Greece scored their goals through Dimitrios Salpingidis and Vasileios Torosidis to grab the three points in the game while Group B leaders, Argentina, Nigeriaâ€™s conquerors in their first match, beat South Korea 4-1 in Johannesburg in the earlier match to take their tally to six points.

South Korea, Eaglesâ€™ last group opponents are still in the race with the three points they had from the 2-0 defeat of Greece in the opening match.

Nigeriaâ€™s Eagles are yet to secure any point in the event.