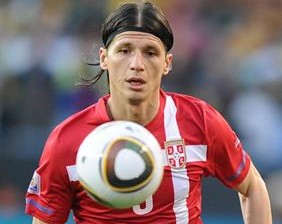 High flying Germany kick off against Serbia in the afternoon match which will be followed by an equally intriguing match between the USA and Slovenia. Finally England try to rebuild their reputation against outsiders Algeria.

Germany v Serbia:
Germany the team to watchAmbushed 1-0 by Ghana, Serbia have the difficult task of bouncing back against a German team who have arguably been the best team so far in the tournament. The match at the Nelson Mandela Bay Stadium in Port Elizabeth promises to feature goals after Germany put four past Australia. Captain Philipp Lahm and his teammates appear to have forgotten about the absence of injured star Michael Ballack and Bastian Schweinsteiger has stepped up into a leadership role. Strikers Lukas Podolski and Miroslav Klose have erased their poor domestic seasons by finding the mark while Serbia will have to be much improved to reverse their fortunes.

Slovenia v USA:
A match that could decide the groupSlovenia and the USA turned in morale boosting performances in their openers as the USA held England to a 1-1 draw and Slovenia left it late to edge Algeria 1-0 making this a key contest in determining who might go through. Robert Koren was the hero for the European side in their opener while the USA will rely on skipper and star player Landon Donovan. The US reached the final of the 2009 Confederations Cup on these same South African pitches and upset mighty Spain along the way before bravely going down 3-2 against Brazil. Tim Howard who was outstanding against the English is set to be fit to take his place in goal.

England v Algeria:
Capello’s England have no room for errorThe English burned up one of their aces when they were held by the US and only a victory against outsiders Algeria in Cape Town will keep them on track for the second round. There were already doubts about the goalkeeper’s position before the tournament and Robert Green’s howler against the US has hardly erased those suspicions. England cannot be overconfident against what will be a higly motivated Algerian team that has talent in the form of Karim Ziani, Karim Matmour and Madjid Bougherra amongst others.