World Cup: Cameroon Out! Netherlands in! 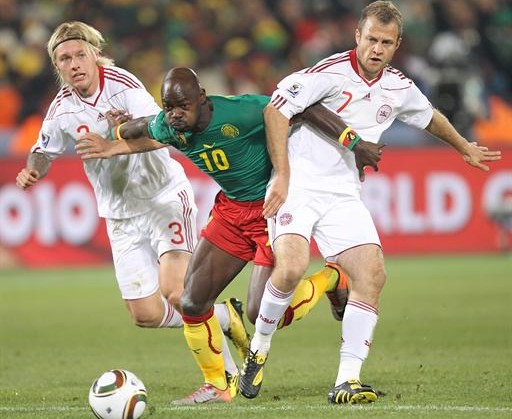 The Netherlands qualified for the knockout phase as they defeated Japan 1-0 in Group E, but only when Denmark later beat Cameroon, who were thereby eliminated from the World Cup.

Ghana failed to capitalise on over an hour of numerical superiority in a 1-1 draw with Australia butwent top of Group D anyway. Meanwhile the French fiasco deepened when agonised in-fighting resulted in Nicolas Anelka being thrown of the squad for a foul-mouthed tirade at the coach.

Denmark ended Cameroon’s hopes of reaching the last 16 of the World Cup with a 2-1 victory here on Saturday, a result which means Group E leaders Holland become the first team to qualify for the next round.Cameroon scored first when Samuel Eto’o coolly shot into the corner of the net after 10 minutes after a pass from midfield was intercepted, but Arsenal’s Nicklas Bendtner struck back for the Danes, converting a cross in the 33rd minute.Jon Dahl Tomasson was denied by a post shortly before half-time in a match full of defensive errors.

But Dennis Rommedahl gave Denmark the lead, curling a neat finish around Cameroon ‘keeper Hamidou Souleymanou on 61 minutes. Despite several scoring opportunities the west Africans saw their hopes of progressing further in the competition vanish.

Australia v Ghana: Kewell off as Aussies pay penalty in Ghana draw.
Australia’s hopes of qualifying for the World Cup second phase suffered a blow Saturday when they could only manage a 1-1 draw with Ghana, who went top of Group D.

Brett Holman bundled Australia, coming off an opening 4-0 loss to Germany, into an 11th-minute lead at the Royal Bafokeng Stadium but after 25 minutes it was all-square in controversial fashion.Jonathan Mensah’s drive hit Harry Kewell, standing on the goal line to defend a corner, on the upper arm and Italian referee Roberto Rosetti pointed to the spot, pausing only to dismiss Kewell. Asamoah Gyan stepped up to fire past keeper Mark Schwarzer.

The draw means Ghana have four points after earlier edging Serbia, meaning Australia must beat Serbia in their final match to stand any chance of reaching the last 16 while hoping Germany beat Ghana.

Netherlands v Japan: Sneijder unlocks Japanese fortress
The Netherlands all but guaranteed their place in the second round after forcing their way past Japan in Group E by the narrow scoreline of 1-0 in Durban. Wesley Sneijder was the hero for the Dutch with a ferocious first-time shot on 53 minutes that the Japanese ‘keeper Eiji Kawashima was unable to keep out despite getting a hand on the ball. The Japanese threw everything forward in search of the equaliser but eventually ran out of time although they can take great heart from their dogged and efficient performance.

Holland now have six points after two matches and will qualify later Saturday if there is no winner between Denmark and Cameroon in the second Group E clash.