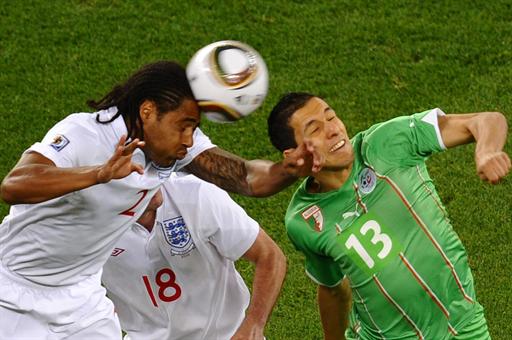 England v Algeria:Â  Algeria hold awful England!
England were held to a 0-0 draw by Algeria in Group C on Friday meaning they must beat Slovenia next week to be sure of qualifying for the second round of the tournament.

England again showed little to justify predictions they could figure in the later stages as they rarely threatened their north African opponents who could have stolen victory if they had had more potent strikers.

England had dropped ‘keeper Robert Green after his blunder that handed the USA a draw in their opening match, but his replacement David James was rarely seriously tested.

Jermain Defoe’s introduction in place of Heskey briefly lifted the tempo of England’s game but they failed to find the breakthrough and Fabio Capello’s men must now beat Slovenia on Wednesday to qualify from their group.

The United States came back from 2-0 down to pull off a remarkable 2-2 draw against Slovenia thanks to second-half goals from Landon Donovan and Michael Bradley in Group C.

The European side thought they had done the hard part with first-half goals from Valter Birsa and Zlatan Ljubijankic but were unable to protect their lead as the Americans threw everything forward in a second-half blitz.

Slovenia now have four points, with the USA on two while England on two points and Algeria on one point after another crucial match at Cape Town.

The first surprise of Friday’s action took place at Port Elizabeth where underdogs Serbia defeated Germany 1-0 in a match that featured nine yellow cards and one red which was shown to Miroslav Klose after just 37 minutes. Just moments later Milan Jovanovic fired the ball home from close range and Serbia then dug in deep to protect their advantage.

The Spanish referee was just one of the talking points but Germany missed a golden chance to equalise on 60 minutes when Lukas Podolski has his penalty kick well saved by Vladimir StojkoviÄ‡.

It was Serbia’s first ever World Cup victory after losing all three matches four years ago on their debut in Germany.