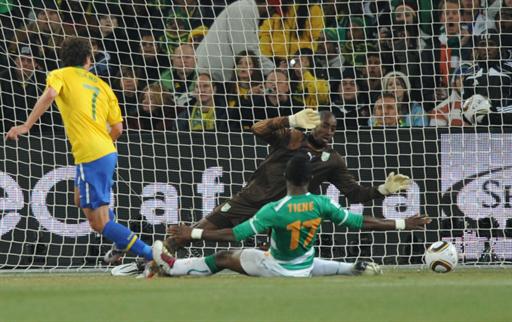 Brazil back on track with 3-1 victory over Ivory Coast
Luis Fabiano struck twice to put Brazil on track against the Ivory Coast before Elano added a third as the South American favourites hit their stride in a 3-1 win over Ivory Coast. They become the first team to qualify for the second round. A bitterly fought contest that saw Kaka sensationally sent-off in the dying moments for a non-existent yellow card also saw the Didier Drogba on target in the late stages but by then the result was no longer in doubt. The Elephants had early control and had Brazil under pressure but Luis Fabiano struck a wonder goal on 25 minutes to completely open up the game for Dunga’s side. His second goal on 50 minutes was clearly hand-ball despite a great finish and by that time the West African’s were out of the contest. Elano’s goal on 62 minutes put Brazil in an even stronger position before Drogba’s header restored a degree of pride for Sven Goran Eriksson’s men. Brazil are now safely qualified for the second round.

New Zealand pull off miraculous draw against Italy
The ‘All Whites’ of New Zealand continued the trend of major upsets at this World Cup as they held defending champions Italy to a shock 1-1 draw at Nelspruit. Ricky Herbert’s side even took a shock lead on seven minutes when Shane Smelz stabbed the ball home after a miscue from Fabio Cannavaro. But the Italian’s threw everything forward in search of an equaliser and were somewhat fortunate to win a penalty on 26 minutes when Daniele De Rossi dived in the box and convinced the referee he had been fouled. Vincenzo Iaquinta did the business from the penalty spot and most pundits then expected Marcello Lippi’s side to run out comfortable winners. However the Kiwi defence were rock solid and their goalkeeper Mark Paston had the game of his life as they somehow weathered the second-half storm. It will undoubtedly go down as the greatest result in New Zealand’s modest footballing history.

Paraguay rip into Slovaks to close in on 2nd round
Adventurous Paraguay took a huge step toward the second round when they beat Slovakia 2-0 in some style on Sunday in their Group F match.Paraguay began with three strikers in Nelson Valdez, Lucas Barrios and Roque Santa Cruz but it was goals by midfielders Enrique Vera and Cristian Riveros that saw the South Americans to victory and a total of four points after two matches, having previously held world champions Italy to a 1-1 draw. Now a place in the last 16 looks almost certain with just minnows New Zealand to come on June 24th.