One thing that has been giving the Foreign Technical Adviser of Nigeriaâ€™s Super Eagles, Lars Lagerback a source of worry ahead of tonightâ€™s last group match of the 2010 World Cup is the fast pace of South Korea.

The Swede has been telling his players to brace up for the war against the Koreans, saying that they must be ready to confront them strength with strength. 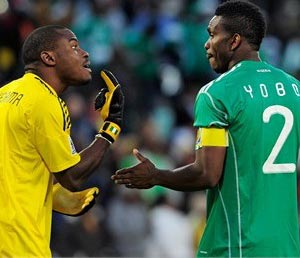 He told PM Sports at their Richard Bay camp in Durban, South Africa this morning that â€œthe Eagles are aware of the fast pace of the Koreans. They know what they did against Greece when they won 2-0, and against Argentina. Though they lost the match, their fast pace style of play gave them a goal against the Argies.

â€œI have told them everything they need to know about the Koreans and even showed them the video of our opponents. These people are fast on the counter and attack. There is no doubt that their pace is going to be our worry and challenge in todayâ€™s match. The most important thing is that we must raise our game. Itâ€™s anybodyâ€™s game. We are to use our chances and turn the game to our advantage.

â€œThe match will be very tough because South Korea and Nigeria have equal chance to qualify to the Round of 16 and our opponents will put a lot of pressure on us because of the important of the game to them. They have won one match and they need to win this match. Itâ€™ll be another challenge to Nigeria.â€

Captain of the Eagles, Nwankwo Kanu is also making a clarion call to his teammates, as he looks forward to taking part in the match.

He said: â€œWe have to play the game of our lives. This is a must-win match as we donâ€™t want to leave the World Cup now. It will be a shame if Nigeria crash out of the mundial without winning a match in South Africa.â€

Striker Osaze Odemwingie told PM Sports that the die is cast and â€œwe have no choice than to win the match at all costs. A lot of people have abused us, which we must correct and give Nigeria a different impression about us.â€